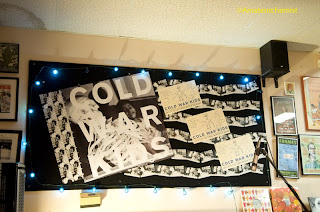 I forgot to mention that when I caught The Airborne Toxic Event at Fingerprints Records that I was stoked to find the Juliana Hatfield's live cd The White Broken Line. I didn't have any intentions of buying too many cd's but sure enough I kept on thinking of other titles I needed and ended up with a small stockpile of cd's. It is a shame to see so many good record stores closing. Fingerprints records has managed to persevere with its great selection of titles and intimate in-stores. The Cold War Kids stopped by to support of their new album Loyalty to Loyalty. 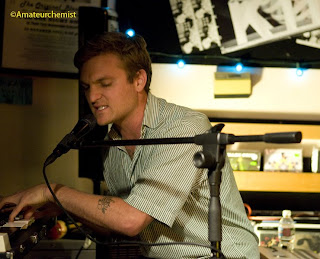 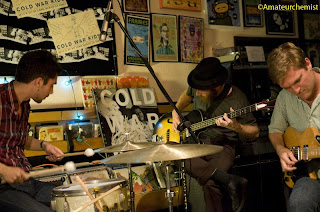 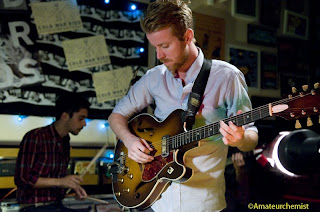 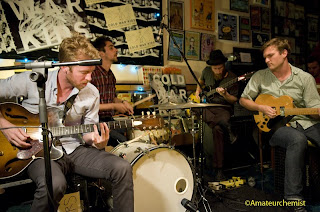 It is hard to believe that Robbers and Cowards came out in October 2006. I first reviewed the Cold War Kids back in January 2007 at the Spaceland. The Cold War Kids toured relentlessly selling out the El Rey and the Wiltern and building a large fanbase. I started to get excited about new Cold War Kids music when I caught them at the Samueli Theater where they played "Mexican Dogs".

A stripped down assortment of instruments started to pump out the bluesy notes of "Against Privacy" from their new album. Matt Aveiro (Drums) had a singular snare drum and bass drum to tap out the rhythms while Matt Maust (Bass) was nearly in the record bin as there was no space on the stage. Nathan Willett (Vocals) displayed his vocal prowess by diving into the upper register for the opening verse of "Relief". Cold War Kids slowed it down for a bit during "Every Man I Fall For" as Jonnie Russell (Guitars) was attacking a Roland drum machine adding a slew of hi-hat slashes against the reverb drenched snaky guitar line.

"I've Seen Enough" resumed the accelerated pace as the shards of reverb laced guitars penetrated your soul as deeply as Nathan's urgent vocal delivery. A stuttering trash can mutilated electronic drum beat quickly signaled the crowd to clap along for a rousing version of "Something Is Not Right With Me". I should also mention that it was announced earlier in the evening that the whole session was being recorded for a future release just like some of their prior in-stores with Damien Rice and The Hold Steady. A welcomed deviation from their hand written setlist occurred when they tore into "Dreams Old Men Dream" which has a chorus that bursts at the seams lyrically and sonically. They closed out their mini set by digging in the vaults for "Expensive Tastes". I picked up the deluxe edition of their new cd and patiently await the release of their in-store performance at Fingerprints. 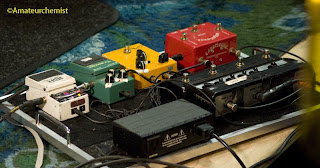 Posted by Amateur Chemist at 12:36 PM

hey any idea what the red and yellow pedals are? I love the sound of this band

the yellow one is a T-Rex Mudhoney.
not sure about the red one but i would love to know too !