Foo Fighters and Queens of the Stone Age at the Avalon 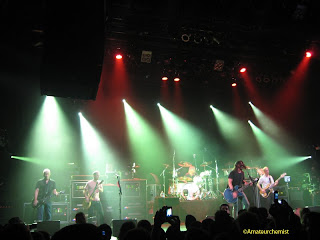 I get a lot of emails about upcoming shows but a secret show involving Queens of the Stone Age and Foo Fighters is a seismic event. It turns out that Research In Motion was throwing a launch party of their latest phone, the Blackberry Storm.

I only knew about the Blackberry Storm because they were using the new Killers song "Human" for their commercial. Apparently they still had some money left after paying the Killers because a private party with the Foo Fighters and Queens of the Stone Age couldn't have been cheap.

Queens of the Stone Age 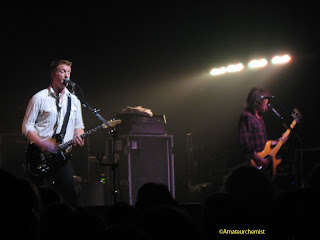 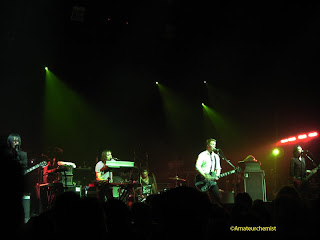 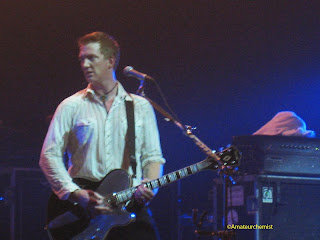 "You Think I Ain't Worth A Dollar But I Feel Like A Millionaire" kicked off things as Queens of the Stone Age showed no signs of rust. Joey Castillo (Drums) and Josh Homme (Vocals/Guitars) have been on tour with Eagles of Death Metal while I just saw Michael Shuman (Bass) a few days ago melting faces with Jubilee. The crowd started to warm up gradually throughout the evening as "3's & 7's" was familiar to those who bought the expansion pack for Rock Band.

The highlight of the night was hearing the foreboding bass line of "Mexicola" from their self-titled debut album. My copy of their first album is the first version released on Loose Groove records created by Stone Gossard of Pearl Jam. Josh had a Fender Telecaster deluxe for the jangling chords of "Go With The Flow" that woke up the audience. "Little Sister" and "Sick, Sick, Sick" back to back was stunning. Troy Van Leeuwen (Guitars) went crazy during a wah drenched solo for "Song For The Dead". It was a solid set considering they barely had any time to rehearse. I have to reiterate that hearing "Mexicola" was mind blowing since I used to play that whole album on my guitar all the time. 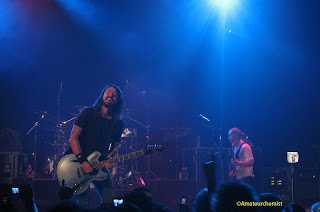 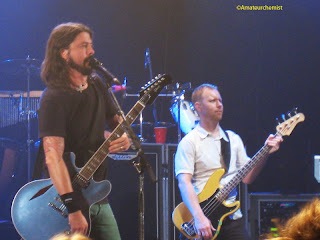 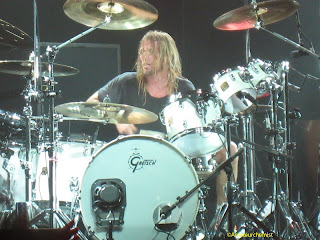 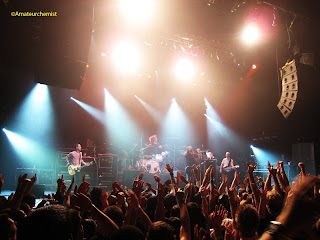 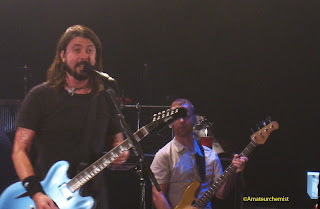 I was lucky enough to catch the Foo Fighters at the Troubadour earlier this year. This show ranks a little higher as it was a full blown rock show by Dave Grohl (Vocals/Guitars) when he fired up his custom blue Trini Lopez Gibson guitar. A few of the main rock staples were quickly dispensed as the Foos played "All My Life" and "Times Like These". The full band came out during "Long Road To Ruin" as I still didn't hear the cellist amongst the massive heaps of guitars due to the addition of Pat Smear on guitars.

"Let It Die" had a slew of instrumentation going on but I was laughing at the incorporation of a triangle into the song. The guitars were crushing for "Stacked Actors" as the Foo Fighters must have tuned down to "A" for the bowel shaking riff. Taylor Hawkins had his moment in the spotlight during his '80s metal drum solo that ended with some intense cross over drum rolls.
Dave did have quite the comedic exchange with Taylor in between songs as they "expressed" their love for each other. Dave cautioned Taylor not to "Be weird about it.

Things went acoustic as Dave dusted off "Marigold" which had Chris Shiflett (Guitars) play an orange Gretsch guitar. Taylor tapped into his inner Phil Collins as he sang and drummed during "Cold Day In The Sun". Rami Jaffee (Keyboards) proudly displayed his Casio SK-1 after being introduced by Dave who admitted they only used the best gear. Dave said he would meet everyone at the bar after finishing up with "The Pretender". The Foo Fighters have hinted they will go on hiatus for awhile but I imagine they might come out for the KROQ Acoustic Christmas show next month. They also didn't hand out Blackberry Storm phones in case you were wondering.

I was there last night, and both bands lit it up! Both were very energetic, and did not hold back even though this was a corporate event. The Foo's especially knew that a majority of the crowd had waited for hours to see them, and gladly put on a true rock show for us.
I hope they continue small time (free!) gigs here in LA, even if they don't tour the US or world.

I was there also. Both bands were excellent, foos showed great energy.
Shame the VIP section was overly into it, but thats LA crowds for ya