Jubilee at the Meeting of the Minds Arts and Music Festival 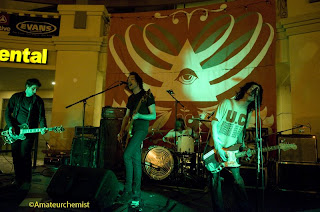 Jubilee made its US debut at the Meeting of Minds Arts and Music Festival in Chino. I was originally skeptical about a free show in Chino, but made the trek out. It was well worth the trip as I caught Earthless, Casket Salesmen and a ripping set by Jubilee. I also ran into the good folks at L.A. Record and Inflight at Night. 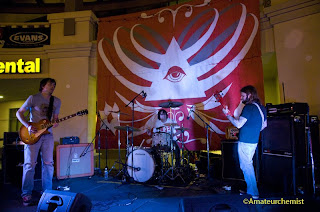 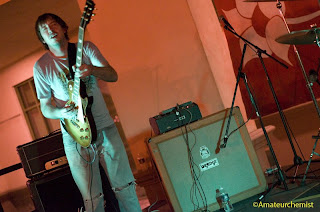 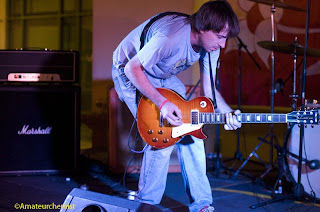 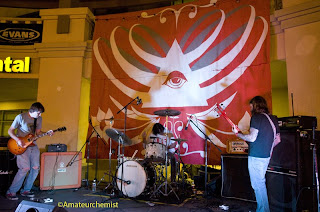 You don't need words when you rock as hard as Earthless. A power trio hailing from San Diego, Earthless brought their instrumental psychedelic sludge rock to the forefront with massive guitar riffs, pummeling drums and bowel shaking bass. I didn't catch any song titles but didn't need them as I wrapped up in their dense sonic fog.

Isaiah Mitchell (Guitars) had a vintage tape echo to tweak his fuzz heavy drone. The dynamics of the band were apparent as Mike Eginton (Bass) was locked in a tortuous rhythm with Mario Rubalcaba (Drums). Mike's Rickenbacker bass danced around Mario's thunderous drumming. Earthless just released a double album Live at Roadburn on Teepee records. The overall sound was mixed well for an outdoor event but I imagine it would be even more intense in a small club with the volume dimed. I will catch Earthless again. 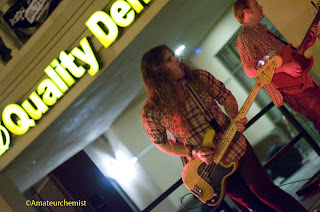 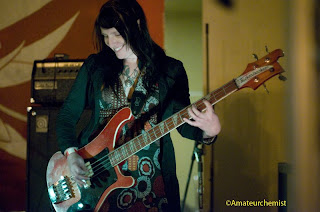 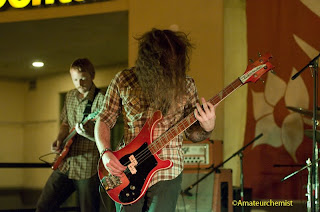 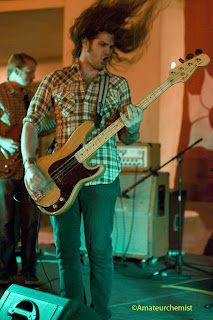 The whole festival was put together by Phil Pirrone who happens to front the Casket Salesmen. I have to give credit to Phil for organizing a free festival in the Inland Empire. The overall vibe was chill but I am sure he hoped for a larger turnout.

The Casket Salesman mined a spacier psychedelic rock with Phil climbing up and down the fretboard of his bass. Phil had a spell of bad luck in that he broke his bass string on the first song. Mike from Earthless was kind enough to loan Phil his Rickenbacker bass for the duration of the set as the intensity of their set picked up. Phil had mentioned that it would be their last show for awhile possibly insinuating that the band was going to break up. "Dr. Jesus" was significantly trippy and groovy at the same time. I also commend Phil for making sure his band did not go over the alotted time because he wanted all the bands to be able to play their full set. 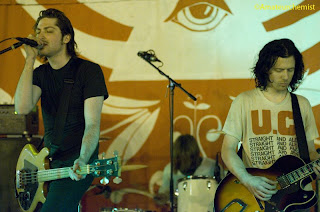 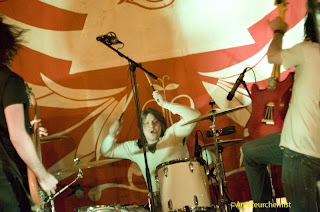 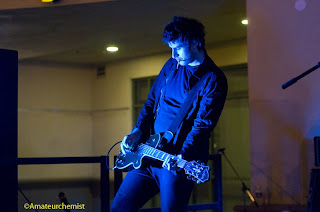 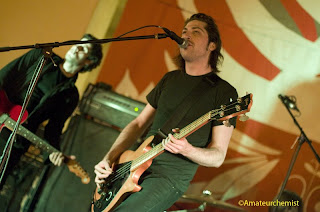 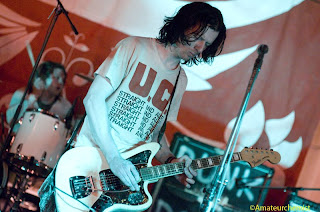 I have been waiting awhile to finally catch Jubilee ever since I heard about their formation. Jubilee is comprised of Aaron North (Vocals/Guitars), Michael Shuman (Vocals/Bass), Jeff Lynn (Guitars) and Troy Petrey (Drums). You may know Michael Shuman as the source of the rumbling low end for Queens of the Stone Age while Aaron North used to shred, jump around and cause havoc during his stint in Nine Inch Nails. Jubilee released an EP Rebel Hiss on Buddyhead records as well as being involved with Topspin Media who offer a digital subscription for all their recorded output.

Jubilee took a little while to set up as Aaron seemed to be having problems with his Ground Control switching system. Aaron opted for the low-fi approach by pulling a few pedals out of his rack and took out his frustration on his guitars and amplifier as Jubilee tore into "I Don't Have An Excuse". Jubilee started to hit their stride during "Rebel Hiss" as Aaron proceeded to break out his trademark high kicking stomp across the stage. The element of danger seems to be the major calling card of Jubilee.

Jeff was deftly handling the soundscapes while Aaron thrashed on his assortment of Fender guitars. I particularly was impressed by his modified Fender Cyclone with Fender Jaguar pickups. Michael's disturbing bass tone is attributed to his Gibson Ripper Bass. Jubilee mixes elements of hardcore, punk and straight up rock for a confrontational aural assault.

"Frown Town" resonated loudly as I could imagine they were referring to Hollywood. Jubilee finished strongly by closing their set with "The Fuzz Are Down" which had all the members of Jubilee screaming at the top of their lungs at the audience backed by waves of noise. Jubilee will tackle their hometown on November 1st when they open for Shudder to Think at the El Rey. Check out Jubilee's prior exploits in the UK over at Isolate By The Hour. 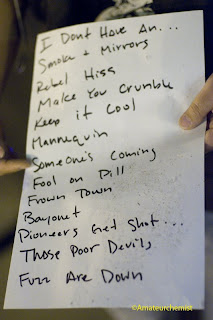 Posted by Amateur Chemist at 10:17 AM