The Stills at the House of Blues San Diego 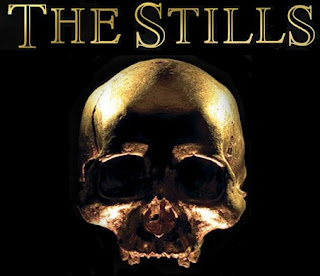 The dreaded photo pass mix up occurred and I was unable to obtain any pictures for the show but it was a superb line up of Kings Of Leon, We Are Scientists and The Stills. It has been awhile since I spotted ticket scalpers at a San Diego show, but I heard offers in the $100 to $150 range for a single ticket.

Logic Will Break Your Heart was a great debut album from The Stills. I remember seeing the video for "Still In Love Song" and was hooked by the propulsive bass line and chiming guitars. "Love & Death" is hands down my favorite song from the album and also made it to my ipod running mix. My expectations for Without Feathers was extremely high and I was a little disappointed by the album but learned the songs translated better in a live setting when I saw them in 2006 at the Henry Fonda Theater.

Oceans Will Rise is the latest release from The Stills and has been spun repeatedly on my ipod. "Don't Look Down" kicked off their set which featured a darkly lit stage with the exception of some golden yellow tube lights attached to their microphone stands. Tim Fletcher (Vocals/Guitars) was slashing away on his Gibson hollowbody while Dave Hamelin (Vocals/Guitars) opted for a Gibson Les Paul. Cymbals were smashed for the intro to "Lola Stars and Stripes" which was great to hear since I didn't know if they would reach into their back catalog. The descending chromatic chords of "Eastern Europe" rocked the audience as the amount of applause grew after each completed song. A storm of jangling guitars during "Being Here" sounded divine as the overall sound was mixed superbly. It was way too short of a set but I hope to catch them on their own headlining tour when it makes its way back to Los Angeles or San Diego.

We Are Scientists dispensed their own brand of whip-smart indie rock that delighted the fans. I seem to keep missing We Are Scientists every time they come through town. I have been missing out because they can out party Bloc Party. Chris Cain (Bass) was effortlessly working over his Gibson Thunderbird bass for some hip shaking grooves as Keith Murray (Vocals/Guitars) was pulling some great sounds from his Fender Telecaster. We Are Scientists are touring in support of their latest release Brain Trust Mastery.

"Inaction" stirred some dedicated fans in the front of the audience to start dancing away. Howling synthesizers kicked off "Chick Lit" as I spotted a Moog Voyager on stage. We Are Scientists didn't let up as the vocal harmonies shined during "Impatient". Keith was tapping on his assortment of guitar pedals throughout the evening but deftly crushed his tremolo pedal in mini machine gun bursts of sounds during "Lethal Enforcer". Chris was obsessively tuning his bass after each song which, I thought was funny since it is more difficult for basses to go out of tune compared to guitars. They closed out their set with a rousing version of "The Great Escape". Could Kings of Leon match the energy of the openers?

I remember seeing Kings of Leon open for the Strokes a number of years ago. I wouldn't have guessed that the Kings of Leon would be an album ahead and questionably as big if not bigger than the Strokes. Their new album Only By The Night is plastered all over Myspace ads informing you of its availability everywhere.

A fuzz bomb bass line of "Crawl" rattled the room as a various strings of lights hanging from ceiling twinkled in the background. I was highly impressed by the energy of the crowd given that it was a Sunday night. Caleb Followill (Vocals/Guitars) seemed to be as impressed as he frequently thanked the crowd and stated he was having a good time. The energy level continued to surge with "My Party" as Jared Followill (Bass) had his own Gibson Thunderbird bass rattling the rafters. Matthew Followill (Guitars) shined all night with guitar work as he filled in all the right spaces during their set.

In the live setting, "Kings Of The Rodeo" takes on new life and burns like shot of whiskey going down your throat. "Fans" started a small wave of female crowd surfers that tried to get on stage to directly profess their love for the Followill clan. A highlight of the night was the power trio of "Molly's Chambers", "The Bucket" and "Sex On Fire" that knocked the audience off their feet. Things took a spacey turn during "Closer" as the microKorg was put into play during the song while Matthew was speaking into the humbucker of his guitar. Caleb did mention his voice was wrecked for partying in Las Vegas, but I think it added some grittiness to his vocals. They closed out the night with "Slow Night, So Long" which was a good call but I think "California Waiting" would have blown the roof off the House of Blues San Diego.
Posted by Amateur Chemist at 8:59 AM

Email ThisBlogThis!Share to TwitterShare to FacebookShare to Pinterest
Labels: House of Blues San Diego, Kings of Leon, The Stills, We Are Scientists