The Whigs at Fingerprints Records 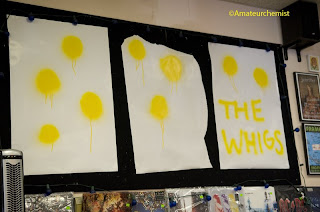 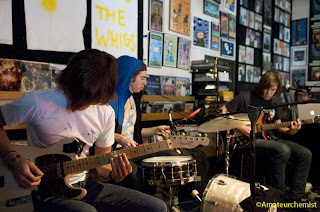 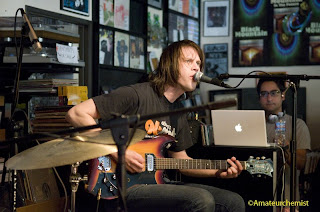 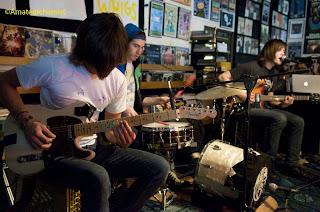 It was barely a month ago that I caught The Whigs at the Detroit Bar opening for Tokyo Police Club. I did pick up a copy of their latest album Mission Control which has crept into major rotation with its rambuncous guitars, and southern fried vibe.

Originally billed as a combination in-store at Fingerprints Records with The Kooks and The Whigs, The Kooks had to cancel due to Luke Pritchard's entanglement with a respiratory infection. I recommend Luke starts a course of Levaquin 500mg for at least five days.

It was a stripped down affair as Parker Gispert (Vocals/Guitars) warned the audience that their songs are normally played a lot faster before embarking on a bluesy version of "Like A Vibration". Parker had his full pedalboard in front of him that included two Boss Blues Drivers. Tim Deaux (Bass) opted for a Fender Telecaster guitar instead of a bass as he used a glass slide to fully bring out the southern rock in the Athens, GA trio. Julian Dorio (Drums) had a minature drum kit with the bass drum strategically covered by a Whigs t-shirt.

The galloping rhythm of "Production City" was missing the harmonizing background vocals but still rocked nonetheless. Tim offered up some more glass slide guitar work for "Right Hand On My Heart" which breathed some new life into the song. I was impressed how well the songs stood up in their slower pace.

All of those in attendance were also treated to free tickets to see The Kooks and The Whigs at the Hollywood Palladium to make up for the cancelled appearance which brought out some vocal cheers from the crowd. I hope Luke gets better but I know The Whigs will be at full strength for these upcoming shows.
Posted by Amateur Chemist at 9:00 AM

Email ThisBlogThis!Share to TwitterShare to FacebookShare to Pinterest
Labels: Fingerprints Records, The Whigs