The Presets Interview with Kim Moyes 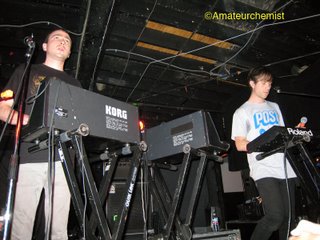 The new album from The Presets Apocalypso is coming. You have been warned. I downloaded the album from itunes a few weeks ago and know it will finish in my top 5 albums of 2008. Kim Moyes of The Presets answers a few questions prior to their sold out show at the El Rey theatre on May 20th.

AC:How does the songwriting process work in The Presets? Do you start with synths? Beats? or lyrics?

KM: We start with some kind of idea that might be a chord progression or a melody or a loop on the computer and then thrash it out till it feels good. then we look for more sections and try to shape it according to how it is making us feel. This process can take sometime as we are going back and forth from working together to working solo on in until it has a good decent shape. When it the song starts to present itself, Jules will then start adding vocal ideas which later turn into the lyrics.

AC: I have seen you five times in concert and love the fact that you have two Korg MS-20's on stage. What drove this decision to use vintage gear while on tour?

KM: It's been a nerdy passion of ours for quite sometime now and apart from the great sound these synths make they have such a distinctive look about them. We are very familiar with these synths and can get around them quickly so it's just the easiest option for us to use them live.

AC: Another amazing aspect of your live show is your seamless incorporation of song samples into your set. How did you stumble upon this idea?

KM: Pure necessity! When we first started playing live we had other members in the band and used no backing tracks or samples, but these guys had to leave for various reasons and we were always left together, 2 people who couldn't do everything. We then started playing with an ipod. The right side of the stereo feed would be beats, the left would be the music and we had filtered the beats in such a way as to not have them clashing with the live drums too much. Then we decided to use a computer with 6 separate tracks that gave us more control over what we could leave in and leave out of each song. It's been working pretty good so far i think.

AC: "My People" is synthtastic. What synthesizers did you use to record the song?

KM: We used the Korg ms20 for the bass fed through various layers of distortion and a Korg Legacy Poly6 for the Arp synth.

AC: How is the new record coming along? Is there a release date? Any collaborations?

KM: May 13th. No collaborations. Just us 2 control freaks.

AC: How does the recording process work in The Presets? (ie What Software/Hardware do you use?)

KM: We record everything on to Protools through Digi 002. we use Neve and Universal Audio pre amps, Ibis and Neve eq's, DBX and Neve compressors. we both have Apogee mini me's so we dont have to use the crummy a/d convertors in the 002.

AC:How was the Australian tour with Daft Punk? Did you still use the Daft Punk sample in your set on those nights?

KM: It was a dream come true and of course we didn't play da funk, we are not crazy ya know..

KM: We are coming to the US in late May and will be touring all over right till the end of June. But we will be back later I promise.

AC: What effects pedals do you usually employ live and in the studio?

KM: Too many to mention, lots of distortions and phase.

AC: With just two members in the band, Have you entertained the notion of adding another touring member to lighten the playing duties?

KM: That would be great! We are just waiting till we meet someone good enough for the job..hahah!

AC: What was the first keyboard you owned?

KM: I have some 12's just come out. Wet n Wild was re released with some remixes. Fistogram just got released with a killer D.I.M remix. Party Machini is coming out soon that has an amazing Tomboy Remix on it. I don't plan to stop making music anytime soon so anything is possible..

AC: What were some of your favorite places to play in the U.S?

KM: Cleveland is always fun in that tiny basement under the restaurant with no P.A. its ALWAYS insane. umm Chicago, LA, Pomona, San Fran, NYC, Austin, Fucking EVERYWHERE!!!! I love it!!! I want to open an In and Out Franchise.

AC: For Kim, Would you ever tour with an electronic drum kit?

KM: NO WAY!!! I hate the look of those things and they always sound so disconnected from the music. I would like to try triggers but my friends who use them always look stupid when there is Latency between the real sound and the triggered sound.. I like laughing at them too much and how would i look if I was flaming my samples all the time?

AC: If you could take any four bands on tour with you, Who would you select?

AC: Are there any new bands that you have been listening to?

KM: No. Only the Presets.. haa! sorry, been too busy finishing the record.

AC: Any plans for a Live DVD?

KM: No plans but I am sure the record label is thinking about it.

Thank You to Kim from The Presets for taking the time to answer these questions.
Posted by Amateur Chemist at 7:53 AM

Awesome!!! As if I wasn't already excited enough for the concert, now I really can't wait! The new album is incredible - that show is going to go OFF!!!

Interesting to know some of the synths used on the record.