A whole lot of shows were going on Wednesday. Nick Cave and the Bad Seeds, Spiritualized, and Cat Power were at the Hollywood Bowl and MGMT was at the Henry Fonda Theater. I didn't hear about MGMT but I heard Nick Cave was epic. I opted for my own epic show with We Barbarians, The Whigs and Tokyo Police Club at the cozy Detroit Bar. 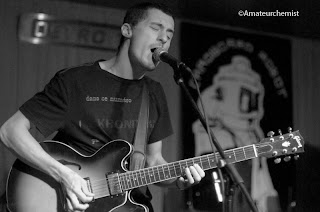 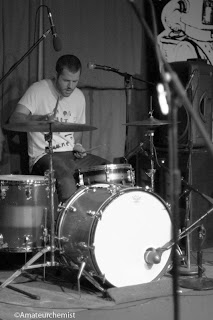 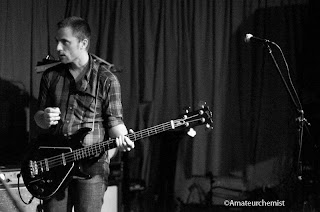 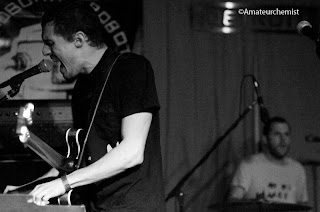 It has been almost a year since We Barbarians hit the scene opening for the Delta Spirit at the Detroit Bar. I have practically worn out my copy of their debut EP "In The Doldrums" and was excited to see they posted a few new tracks on their myspace page along with the news that a full length album is due in December.

The crowd had started to file in as We Barbarians constructed a solid set featuring a few new tracks that hopefully will be on their new album. The sullen organ notes of "Yesmen and Bumsuckers" gave way to some ambient guitar notes as Davey Quon (Guitars/Vocals/Keyboards) switched back and forth between the instruments. Nathan Warkentin (Drums) and Derek Van Heule locked down the rhythm section to give Davey space to float his textural guitar arrangements on top of their songs. "Sixes and Sevens" starts with a volume swell of reverb guitar before Nathan comes in with a tight drum shuffle. We Barbarians will be back at the Troubadour with Mando Diao on November 3rd. 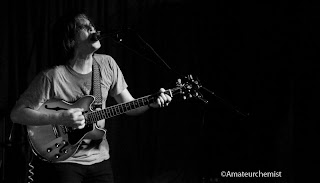 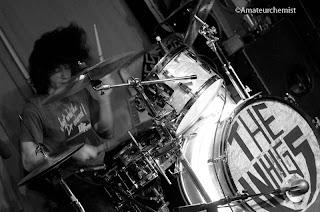 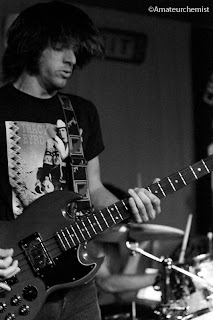 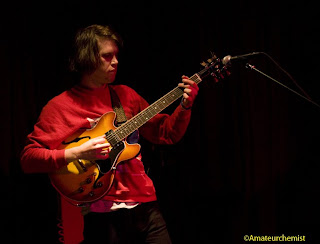 The Whigs rocked the Detroit Bar like their life depended on it. An explosive trio hailing from Georgia, The Whigs had nothing left on the stage as they were sweat drenched two songs deep into their set. "Mission Control" served as a slow cooking introduction to the band as Parker Gispert (Guitars/Vocals) strummed his Gibson hollowbody guitar. The floor started to shake courtesy of Julian Dorio (Drums) as he pummeled his drum kit for "Like A Vibration" and the Whigs started to unleash their rock fury on the unsuspecting Detroit Bar audience.

The jangling guitars of "Hot Bed" immediately triggered mass foot tapping as the Whigs were already hitting their stride. Tim Deaux (Bass) was adding background harmonies and a heart thumping bass line via his Gibson SG bass. The Whigs imbibe the essence of southern rock but assault it with a ferocity that I haven't seen in awhile. Vocal harmonies rained down once more for the southern fried "Production City". Parker kept the momentum alive with a rambling version "Right Hand On My Heart". It was impressive to see a trio conjure this much noise as each member was vital to their collective sound. The Whigs will be back in October with the Kooks playing the House of Blues Anaheim on the 27th and the Hollywood Palladium on the 28th. I probably will be at both shows. 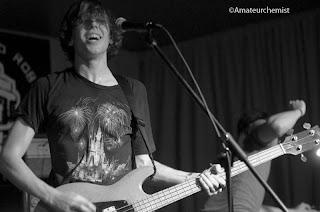 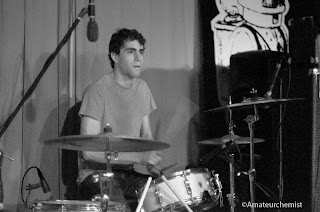 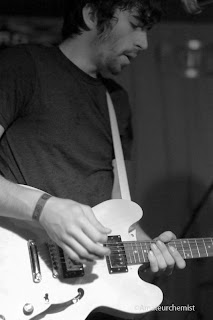 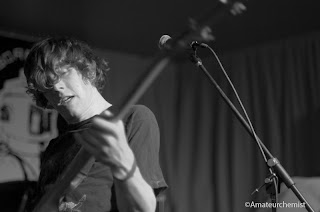 I had mentioned in a prior review of We Barbarians that I will probably like your band if you play a Gibson Ripper bass. When Dave Monks (Bass/Vocals) approached the microphone with his own Gibson Ripper bass, it only took a few notes for me to be sold. Tokyo Police Club strategically mixes elements of Jawbreaker, Weezer and the Rentals for bash and pop caffeine fueled songs.

Graham Wright (Keyboards) was primarily anchored to his Alesis Micron keyboard frantically whipping up ascending or descending synth lines to the fast paced rock tunes. A twenty song setlist blazed by in 55 minutes as they raced through their tunes. "Box" kicked off their blazing set as Josh Hook (Guitars) worked in some colorful guitar squalls to racing bass line.
"Graves" had the requisite "oohs and aahs" hovering around the bursts of tremolo guitars. Elephant Shell is the latest release from Tokyo Police Club and clocks in at the 28 minute mark. The brevity of the album actually helps the band as it is very easy to hit the repeat button. I will admit I was suckered in by the combination of the Alesis Micron and strategic guitars of Josh.

"Your English Is Good" had people breaking out the dance moves and I even spotted a mini mosh pit. I wasn't surprised they covered The Rentals "Friends of P."."Tessellate" reminded me of an upbeat song from The Promise Ring. Tokyo Police Club capped their set with a number of selections from A Lesson In Crime and strongly closed the evening with "Be Good". Tokyo Police Club will head out with Angels & Airwaves as the openers for Weezer. I hope to catch either the Forum show on 10/17 or the Cox Arena show in San Diego on 10/17.

Tokyo Police Club setlist at the Detroit Bar
"Box"
"Graves"
"In A Cave"
"If It Works"
"Sixties Remake"
"Juno"
"Your English Is Good"
"New New Song"
"Centennial"
"La Ferrassie"
"Cut Cut Paste"
"Friends of P."
"Nursery, Academy"
"Citizens Of Tomorrow"
"Tessellate"
"Shoulders & Arms"
"The Harrowing Adventures Of..."
"Nature Of The Experiment"
"Famous"
"Be Good"
Posted by Amateur Chemist at 11:28 AM