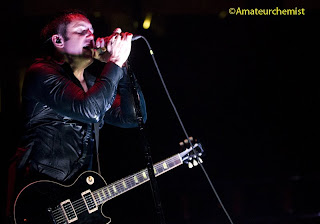 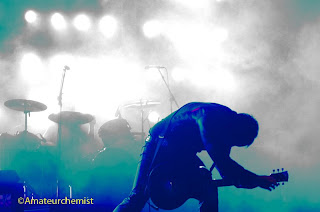 My trip to the Texas ended with a visit to the American Airlines Center for one final Nine Inch Nails show of my mini vacation. There were no photographers allowed for the evening so I am using a few shots from the Houston show. You can check out some actual shots from the show by Team Chemist member Mel here. 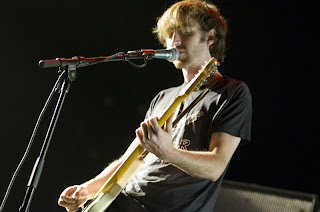 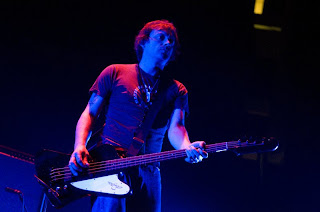 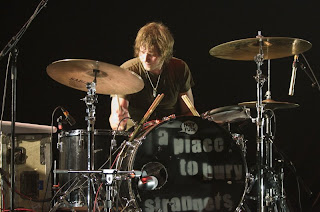 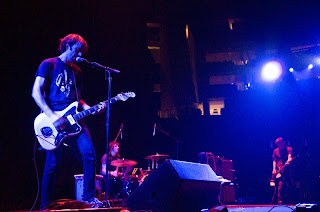 I know I have described in prior reviews just how massive A Place To Bury Strangers sounds live. I counted four Fender amplifier heads and seven cabinets on stage between Oliver Ackermann(Guitars/Vocals) and Jono Mofo(Bass). "Gimme Acid" was as caustic as ever as the song steadily builds before it melts into a furious white noise finale. "To Fix The Gash In Your Head" had a swirling helicopter take off intro held together by Jspace's (Drums) constant hi-hat shuffle. In case you were wondering how you can simulate the dying Tyrannosaurus rex sound of "Don't Think Lover", I recommend you crush your tremolo arm while furiously strumming out the chords. "The Falling Sun" was prefaced with some teeth rattling electronic drum pads. "The Ocean" becomes a feedback opus as Oliver paused momentarily to glaze out into the crowd before ripping back into the song as the strobe lights bore into your skull. I already have my calendar circled for when they return to Los Angeles on October 3rd at the Wiltern with the Dandy Warhols. 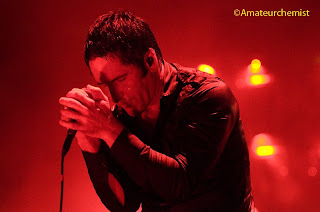 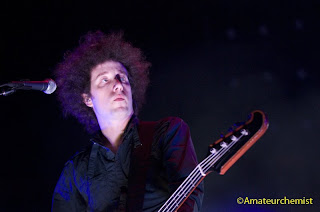 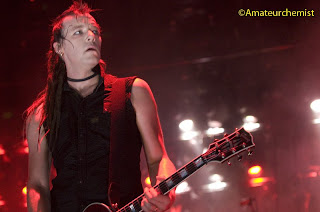 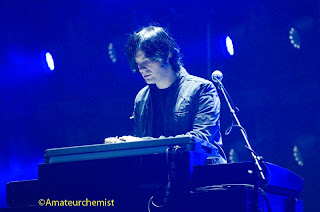 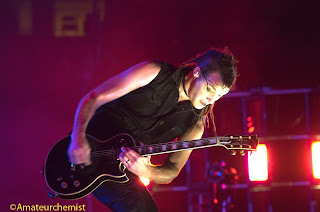 "1,000,000" jump started the fervent crowd at the American Airlines center. Alessandro Cortini (Keyboards/Guitars) had a Fender Jazzmaster to help fill out the sonic landscape as Trent Reznor (Vocals/Guitars) was triggering the echo effect on his microphone stand. A tribal like chant surfaced for "Letting You" as Alessandro added some theremin like sounds with his French Connection keyboard as Robin Finck (Guitars) layed down a wah soaked solo. "Discipline" was another 3 pronged guitar assault as Robin had switched to a wine red Gibson Custom guitar.

The selection of songs from The Slip served as a delicious appetizer to the aural feast of "March Of The Pigs" as the mosh pit tripled in size. "Head Down" was a perfect follow up with its monstrous baritone guitar riff as Trent viciously threw his keyboard stand at the drum riser. "Closer" is one of the staples of a Nine Inch Nails concert with a different twist as Trent interjects a portion of "The Only Time" into the song. A pounding bass line of "The Line Begins To Blur" was a nice surprise as it is one of my favorite songs from With Teeth.

An electronic screen dropped for the mini electronic set featuring "The Warning" which has Robin playing a distorted lap steel guitar. The visuals for "Vessel" were as glitchy as the song with pulses of red lights flashing across the screens. A dynamic shift to some material from Ghosts is always intriguing as they went into "Ghosts 1". Trent seemed to have lost one of his drumsticks for the xylophone but was still able to deftly use the one drumstick and hand tap the other notes.

"Wish" was an abrupt wake up call followed by "Terrible Lie" as Trent threw his guitar and water bottle to punctuate the song. Robin had a Gibson Les Paul Jr loaded with P-90s for "Survivalism" as the visuals of live security cameras flashed on the back screens. The mention of "a tiny little dot" occurred back to back with the songs "Only" and "Down In It". "Head Like A Hole" was another triple guitar blast as the iconic NIN logo closed the main portion of the set. "Echoplex" started the encore off with Josh Freese (Drums) triggering the simulated drum machine on the LED screens. "Getting Smaller" is another rarely played Nine Inch Nails song that I haven't heard since the With Teeth tour in Sacramento. "God Given" had Trent use a Parker Fly guitar as the logo of the gun combined with the cross didn't appear like it did in Houston. "In This Twilight" closed out the evening in grand fashion as my trip to Texas was officially over.