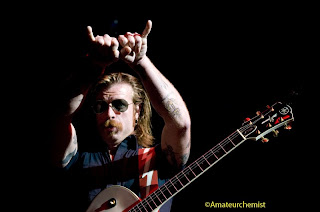 I think the picture above of Jessie "The Devil" Hughes (Vocals/Guitars) is a good summation of how I would rate this particular show. It was too much rock for one hand. The dynamic combination of The Hives and Eagles of Death Metal touched on almost every single rock concert cliche as they demolished the Grove of Anaheim.

The Willowz had a large contingent of family members in the audience since they hail from Anaheim. Chautauqua is their latest release on Dim Mak records and is filled with hard driving fuzzy guitar rock. William-Lewis Mclaren (Guitars) and Jessica Anne Reynoza (Bass) were staunch Fender supporters with their Mustang guitar and bass, respectively.

Richie James Follin (Vocals/Guitar) seemed to be having a good time on stage throwing water bottles out into the crowd and would later throw out colored skulls. The Willowz mined the same sonic vein as The White Stripes and Kings of Leon. "Dead Ears" was the song that specifically recalled Jack White's vocal delivery. They also mixed up their sound with some organ sounds from their Nord Electro 2. 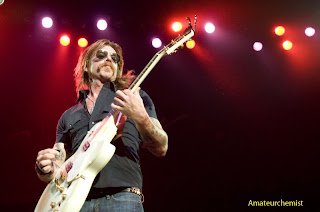 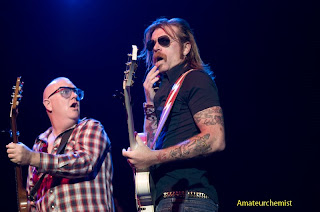 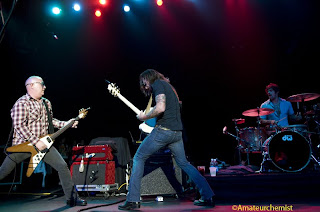 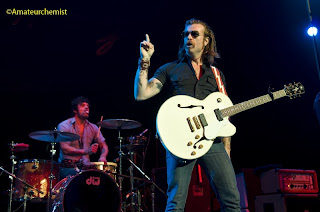 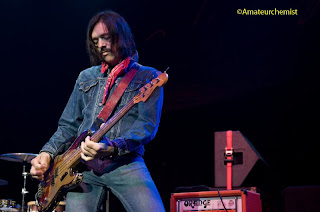 Eagles of Death Metal quickly had the audience shaking their hips with the gyrating gem "Don't Speak (I Came to Make A Bang)". Josh Homme was absent from the drum kit, but Joey Castillo (Drums) showed he could chew gum and play drums at the same time. "Kiss The Devil" had Jessie working both ends of the stage, as the smile on his face was as wide as his mustache. The lo-fi guitar roar of "Bad Drama Mama" was intoxicating as Jessie was wailing on his shiny Yamaha custom guitar.

Dave Catching (Guitar) had his Gibson Flying "V" backing up Jessie's slashing guitar chords to round out the sound. Joey worked a little bit of cowbell into "English Girls" that garnered the requisite chants of "More Cowbell" from the crowd. The slow cooking intro to "Wannabe In LA" demonstrated a nice change of pace before unfurling into a fuzzy octave screaming solo. "I Want You So Hard (Boys Bad News)" and "Speaking In Tongues" brought the house down as they had all the ladies screaming for more and all the guys hoisting their beers in approval. The Eagles absolutely soared high on this particular night. 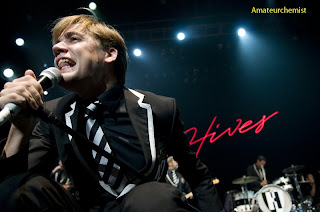 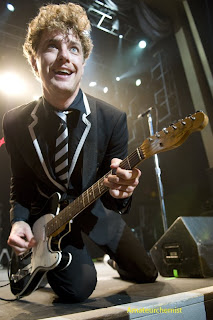 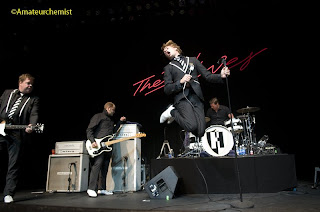 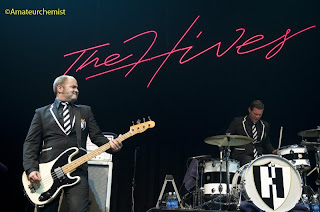 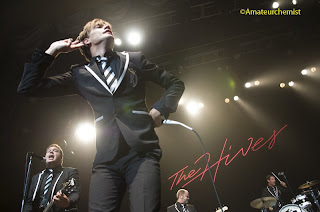 The Hives had to bring their "A" game in order to equal the energy from the Eagles of Death Metal. The Black and White Album is the latest album from the Hives and features the same break neck paced tunes laced with rapid fire drumming and pulsating power chords. I was tempted to pick up one of their shirts that listed the names of all the band members in a style like fellow countrymen Peter, Bjorn & John.

A large red sign emblazoned with The Hives lit up as they appeared on stage. "Hey Little World" was faster and ferocious live as the Hives ripped through the song. It was difficult to photograph Howlin' Pelle Almqvist (Vocals) as he was running frantically across the stage. The Hives looked and sounded sharp as they were decked out in their matching black suits. I would also like to point out they had custom Hiwatt gear that had each of their names on the speaker cabinets.

"Main Offender" reminded me that I need to dust off my skills on Rock Band as Nicholaus Arson (Guitars) was destroying his Fender Telecaster. Chris Dangerous (Drums) upped the ante by turning in a smoking performance on the drums literally and figuratively as a cigarette dangled from his lips. I was stoked they played "Outsmarted" as it barely clocked in over 2 minutes. One of the funnier moments of the show was when the entire band literally froze in place for a couple of minutes before tearing back into the song. "Hate To Say I Told You So" and "Tick Tick Boom" closed out the evening on a high note as the Hives took a bow. I think the Hives covered every single power chord in the book.
Posted by Amateur Chemist at 12:01 PM

Email ThisBlogThis!Share to TwitterShare to FacebookShare to Pinterest
Labels: Eagles of Death Metal, Grove of Anaheim, The Hives, Willowz

I thought $40 was too much for this show but EODM and the Hives rocked it hard that night... that was a hell of a show!!