Polvo at the Echoplex 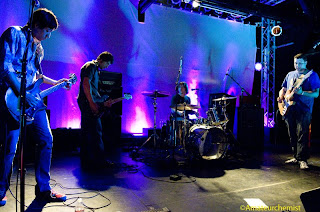 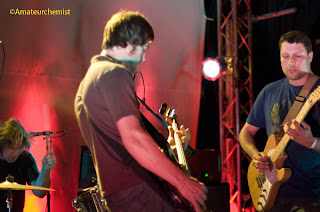 It was ironic that Battles was blaring over the Echoplex soundsystem prior to the arrival of Polvo onstage. The resurgence of weird time signatures and alternate tunings was something Polvo touched on with some of their albums from the early 1990s. It was a no brainer to check them out with the solid line up of The Drones and Trans Am. 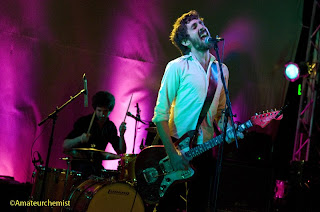 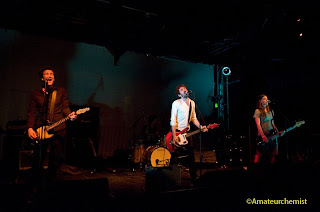 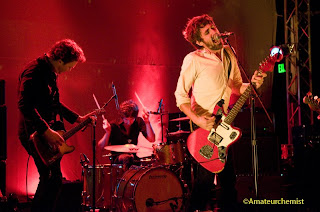 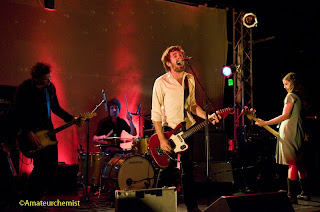 The Drones hailing from Australia banged and clawed their way through a fiery guitar dominated set. Gareth Liddiard (Vocals/Guitars) reminded me of Adam Franklin from Swervedriver with his frequent tremolo arm abuse on his Fender Jaguar. Gareth recklessly strummed his guitar without a pick and would carefully finger pick some notes to vary his guitar tones. Gareth also got some points for bending the string behind the nut for a gigantic dive bombing sound during the set.

Havilah is the fourth offering from The Drones released by ATP recordings. The fragmented jangle of "The Minotaur" stopped and started methodically as the Drones had the volume on the amps dialed to 10. "Shark Fin Blues" unfolded like a short story augmented by more overdriven finger picked roaring guitars. Dan Luscombe (Guitars) broke his string early in the set but adeptly restrung his guitar in between the songs. The Drones will be heading across the states opening for Built To Spill and The Meat Puppets. 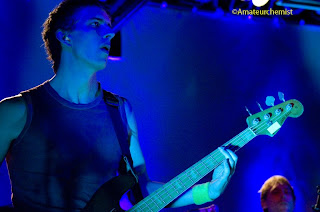 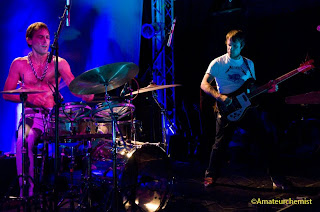 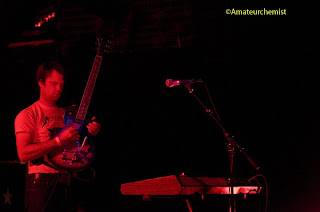 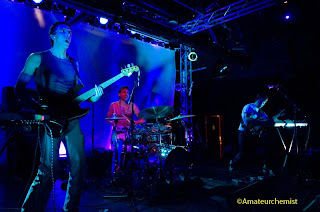 I am ashamed to admit I forgot who Trans Am were until I saw their gear being set up. I quickly remembered I saw them at the Nokia Theater with Tool in December of 2007. The Echoplex quickly filled up as the front barrier was heavily occupied. Trans Am methodically attacked the audience with slicing beats and haunting keyboard riffs from their Nord and Roland keyboards.

Sebastian Thomson (Drums) was rocking a Run DMC like gold chain while pummeling his drum kit. Philip Manley (Guitars/Bass/Keyboards) was the multi tasking all night switching between a Rickenbacker Bass, Gibson Les Paul and his Roland keyboard. Nathan Means (Bass/Keyboards) was dialing up some vocoder magic while eating a bag of Lays chips, as the band played some selections from their album Sex Change on Thrill Jockey records. They played mostly instrumental songs that touched on math metal and tortured synthesizer jams. It was better seeing them up close to feel the rapid fire bass drum beats and frantic guitar riffs. I also spotted The Movies on the side of the stage cheering them on. 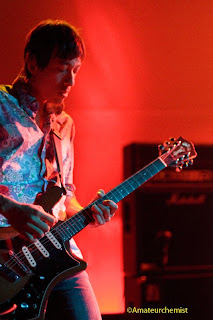 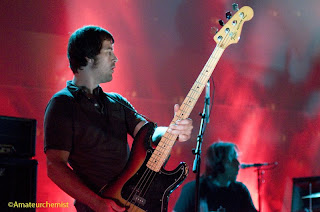 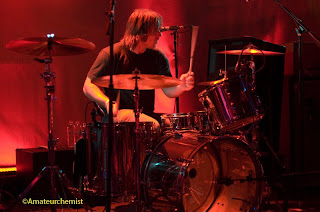 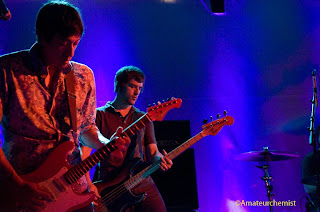 Polvo shouldn't need an introduction if you played guitar in the early nineties. Hailing from Chapel Hill, North Carolina they tailored a distinct guitar sound with such musical contemporaries as Superchunk and Sonic Youth. While largely trying to eschew the tag of "math rock", their use of complex time signatures and use of dissonance would lead you to think otherwise.

Ash Bowie (Guitars/Vocals) strapped on Guild guitar and started to strategically noodle as he started in on a new tune "Mega". Ash had a small arsenal of guitar pedals at his disposal including a Boss Octave, MXR Distortion III and some intriguing Carl Martin pedals (Boost Kick/Heavy Drive). Dave Brylawski (Guitars) never put down his Fender thinline telecaster as he forged his own sonic territory throughout the evening.

"Enemy Insects" from Shapes had a loosened vibe compared to the mounting tension in the recorded version. Polvo really started to hit their stride by tackling "Feather of Forgiveness" with its push and pull dynamic. The members of Polvo were locked in frequently looking at each other for visual cues for time changes. Brian Quast (Drums) covered the flute portion of "Fast Canoe" as the band came back for an encore. "Tragic Carpet Ride" from Celebrate The New Dark Age capped their hour and twenty minute set. I don't think Ash or Dave played more than a handful of "normal" guitar chords. It reminded me that I should explore more alternate tunings and new chords.
Posted by Amateur Chemist at 5:09 PM

Email ThisBlogThis!Share to TwitterShare to FacebookShare to Pinterest
Labels: Echoplex, Polvo, The Drones, Trans Am

Great videos.Thanks for the information.