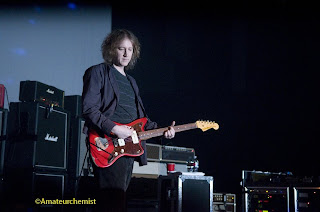 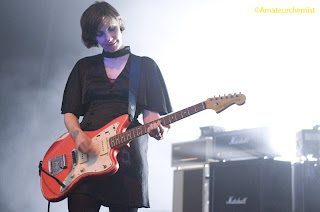 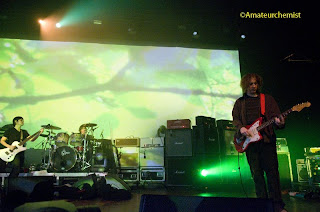 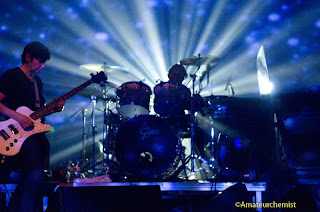 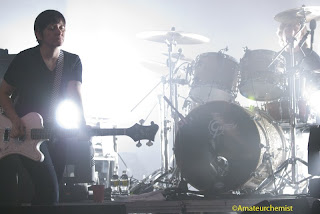 It is no secret that I adore guitar effect pedals. I have a slew of pedals that were collected over the years that were obtained primarily to emulate the fuzz tones of My Bloody Valentine and Smashing Pumpkins. My Bloody Valentine played less than 10 dates in the U.S. and thankfully Los Angeles had back to back dates.

The first night I was on the rail directly in front of Kevin Shields (Guitars/Vocals) and was in disbelief. It was interesting to hear them soundcheck Kevin's guitar through his stack of 7 amplifier heads and 10 cabinets. The Marshall/Hiwatt stack was the primary distortion component of his sound while the other amps handled the clean and reverb drenched portions of his sound.

"I Only Said" had My Bloody Valentine off and running right out of the gates. As much as I was taken by the combined guitar frequencies of Kevin and Bilinda Butcher (Guitars/Vocals), Colm O'Ciosoig (Drums) was a drumming powerhouse as he was locked in with Debbie Googe (Bass). The crowd reaction seemed to be that of astonishment. I could only see a few people swaying to the music. The Santa Monica Civic was an odd choice of a venue but I think the slanted floor helped disorient you along with the bombardment of flickering strobe lights and washes of guitars.

At the beginning of the show, the volume was loud. As the show progressed, It seemed like each song was a tad bit higher on the decibel meter as it built to the zenith of all feedback solos during "You Made Me Realise". Your ears were unable to gage the appropriate volume and your senses were consistently challenged.

"When You Sleep" was simply lush as Kevin consistently would strum and pull down on his tremolo arm on his Fender Jaguar. "Cigarette In Your Bed" featured the rare spotting of an acoustic guitar as Bilinda's vocals were a few sonic layers underneath the dense mix. The dive bombing tremolo effects came during "Come In Alone" as I should note that Kevin used a different guitar for every song.

"Only Shallow" had me transfixed. I go to a lot of concerts and can honestly say that it would have to fall in the top 5 concert moments of all time. I think the version on the second night was superior. Colm shined again with the neurotic drum intro to "Nothing Much To Lose" as the song had a punk ferocity. I really tried to take notes during their performance but was too engrossed. I don't think I have seen such a few number of people texting on their cell phones at a concert in ages.

"You Made Me Realise" was stunning. I need to make a bumper sticker that says, "Honk, if you like feedback". I would imagine only guitar players could fully appreciate what My Bloody Valentine is doing during this section of the show. Feedback is like fire. You have to understand how it works and how to harness it. Kevin and company made feedback come alive as suffocated the audience in noise. I had earplugs but refused to cover my ears as I smiled during every single moment of guitar noise. I hear rumors of a new album but I would be happy with another tour. I just would like to thank My Bloody Valentine for coming back. You presence has been sorely missed.