Weezer at the Cox Arena 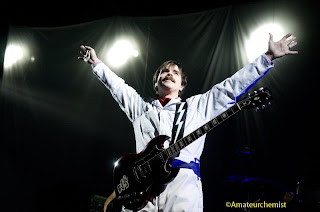 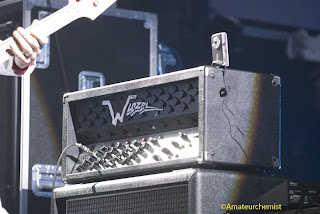 I am proud to say I was in the Weezer fan club back in 1994. My member number was #870. I first saw Weezer in 1995 with the mighty Archers of Loaf and Shufflepuck at the Hollywood Palladium. Sophia Coppola and Spike Jonze were standing next to me checking out the show.

I managed to catch Weezer numerous times over the years at the Whiskey, Universal Amphitheater, Shoreline Amphitheater, Irvine Meadows, Glass House and making a quirky appearance on the Warped Tour. Weezer has been on tour supporting the Red Album backed by Angels and Airwaves and Tokyo Police Club. 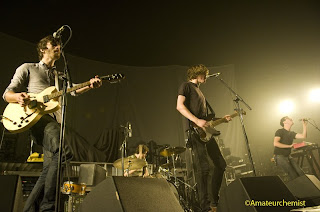 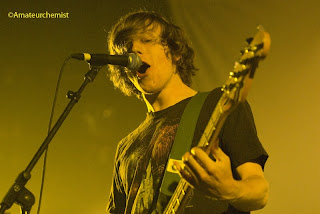 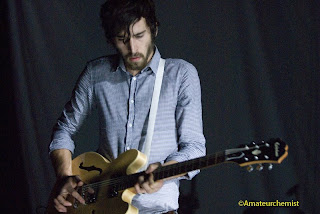 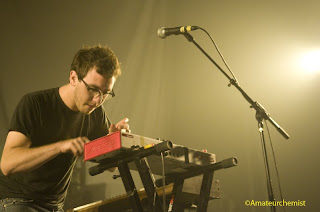 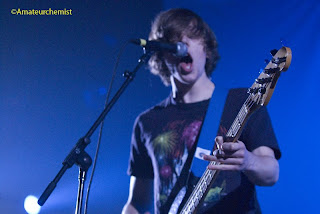 I just caught Tokyo Police Club less than a month ago at the Detroit Bar. Elephant Shell has been consistently popping up on my ipod with its sullen Casio keyboards and propulsive bass lines. Tokyo Police Club didn't waste anytime on stage as they feverishly tried to play as many songs in their set as possible.

I was amazed how comfortable Tokyo Police Club appeared on stage. Their sound was mixed well as Graham Wright's keyboards floated above the driving bass and guitars during "Juno". Dave Monks (Vocals/Bass) had opted for a Fender bass for a cutting round sound for "Your English Is Good" as the crowd clapped along during the intro to the song. Greg Alsop (Drums) was the driving force behind "Tessellate". Josh Hook (Guitars) added his technical noise flourishes to "Nature Of The Experiment". I only wish Tokyo Police Club were given a few more minutes to throw some in some extra songs into their set. 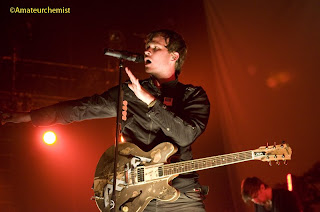 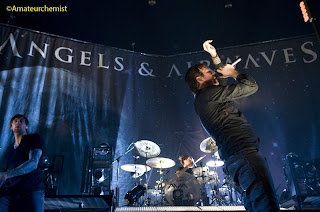 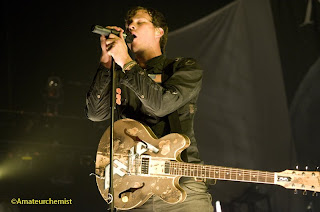 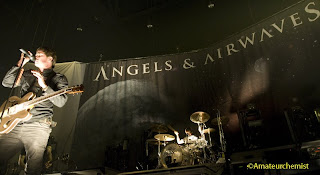 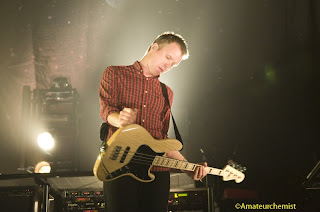 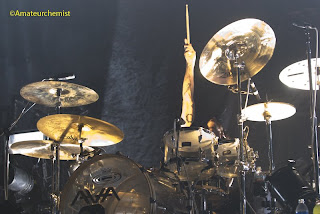 I think Tom likes synthesizers more than I do as I spotted a Moog Voyager, Kawai 88 and a Yamaha Motif Xs7 on stage along with massive amounts of guitar gear. Dialogue sampled from a launching of a space shuttle was pumping through the soundsystem as a swell of synthesizers started to amass. The cheers grew louder as the members of Angels and Airwaves took to the stage. Tom had his custom signature Gibson Hollowbody chiming out the notes for "Everything's Magic". David Kennedy (Guitars) and Matt Wachter (Bass) helped carry the sonic load by occasionally going to their keyboard stations to create a large wall of sound for Tom's ambitious songs.

A musical toy box intro gave way to the machine like drums and underlying piano riff for "Start The Machine". Tom seemed to be having a good time on stage, as he realized nothing beats playing to your home crowd. The marching drums and gigantic swirls of delayed guitars for "Heaven" were punctuated with blasting lights to give the song an epic feel. Tom later switched guitars to a war torn custom signature Gibson hollowbody guitar adorned with an Angels and Airwaves logo that looked pretty cool.

Tom did a little bit of VH1 storytellers when he explained the meaning behind the song "Sirens" which apparently is true to the lyrics in the song. The delay was cranked to epic again for an extended version of "The Adventure". I don't think The Edge from U2 uses that much delay. Adam was killing it on the drums as Tom's phaser pedal was set to stun. Tom announced they would be back in one year as they closed out their set to a large hometown ovation. 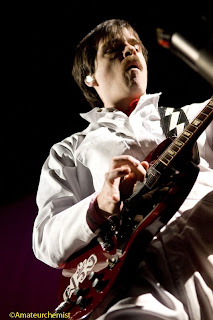 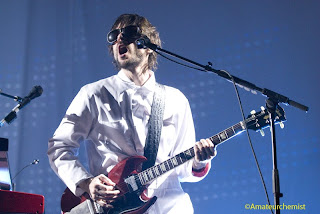 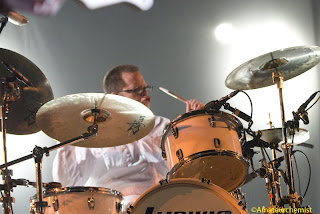 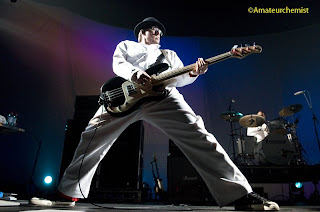 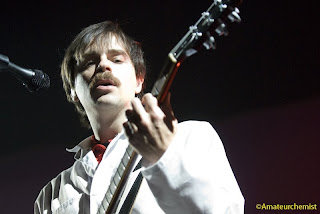 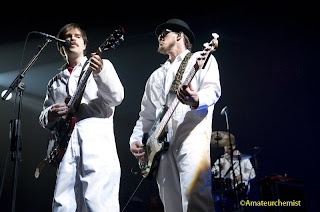 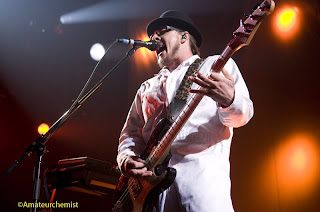 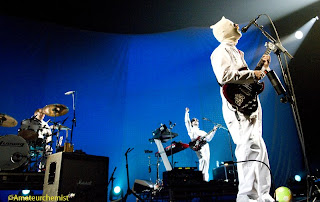 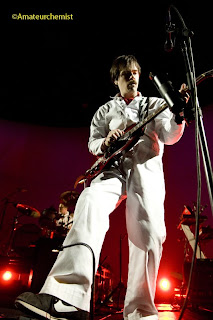 I recently spun Weezer's blue album and realized how awesome their guitar tone was for that album. It was the perfect blend of fuzz and distortion. I was blown away though when I spotted two Diezel VH4 amplifiers on stage. Weezer joins the ranks of Muse, Tool, and Smashing Pumpkins as devoted users of Diezel amplifiers.

Clad in white jump suits, the men of Weezer started to crank out the chords of "My Name Is Jonas". Rivers Cuomo (Vocals/Guitars) didn't even sing the opening lines of the song as Brian Bell (Guitars), Patrick Wilson (Drums) and Scott Shriner (Bass) alternated vocal duties. I instantly had flashbacks about tuning my guitar down one half step to play the whole Weezer blue album from start to finish. The hits did not stop all night as they tore into "Pink Triangle" from the underrated Pinkerton album.

A wahstastic version of "Perfect Situation" had me singing along with the crowd during the chorus. It had been so long since I had seen Weezer live that I forgot how much I enjoyed their songs. "Susanne" was a total shock to me as I still have the Australian import cd of "Undone (The Sweater Song)" on which it was originally featured but found new life on the cult classic movie "Mallrats". Weezer had shed their white jumpsuits for some slick red track suits with Weezer emblazoned on the back to coordinate with the color of their new album.

Tom Delonge came out to assist on the vocal duties for "Undone (The Sweater Song)". Rivers would later rock the headset microphone for "Pork And Beans" as he would power slide across the stage while singing the song. Rivers absolutely shredded during the solo of "Dope Nose". The goodwill amongst the bands continued as Josh from Tokyo Police Club came out to play a little guitar for "Troublemaker" as Rivers paraded around the stage. Patrick stepped up to the microphone with his Fender Stratocaster for a ripping version of "Automatic" from the new album.

Brian showed his dexterous guitar skills for a wah soaked solo during "Hashpipe". "El Scorcho" took an interesting turn as Rivers jumped onto the shoulders of a security guard to solo in front of the crowd in true rock show fashion. The highlight of the night surprisingly was their cover of Pink Floyd's "Time" with the vocals handled superbly by Patrick. I also have to mention his guitar solo for the song was probably the best guitar solo by a drummer that I have ever witnessed.

A collection of devoted Weezer fans joined the band onstage for "Island In The Sun" as a flute solo was incorporated into the song. "Beverly Hills" and a rousing cover of Nirvana's classic B-side "Sliver" continued to keep the energy off the charts. The show hit its apex with a house burning rendition of "Buddy Holly" replete with a giant electronic flashing "W" Weezer logo. That is what I call a "Rock Show".
Posted by Amateur Chemist at 2:40 PM