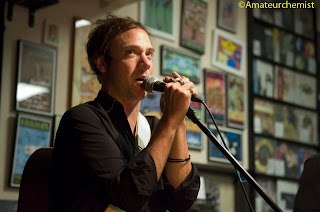 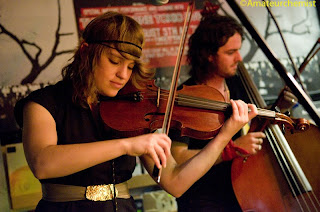 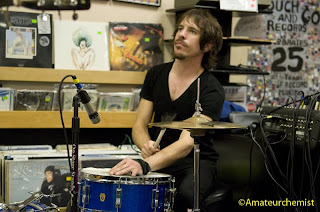 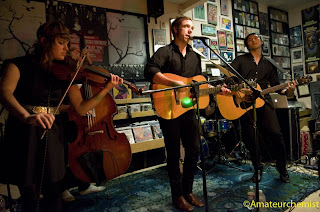 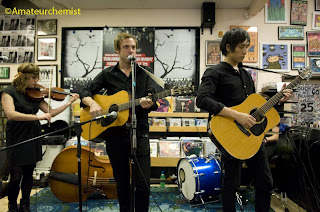 I first documented The Airborne Toxic Event back in November of 2007 when they played a stunning set during their residency at the Detroit Bar. The band is now breaking out into the national mainstream with the help of their infectious tune "Sometime Around Midnight" as many national alternative rock/radio stations have added the song into major rotation. They had played on KCRW's Morning Becomes Eccletic earlier in the day and were gearing up for their sold out show at the El Rey. The Airborne Toxic Event celebrated the release of their debut full length album with a captivating acoustic performace at Fingerprints records.

I had flashbacks of seeing the Silversun Pickups at Fingerprints records after watching The Airborne Toxic Event. I got the feeling that I probably wouldn't get the opportunity to watch the band up this close in the acoustic format ever again. There was an electricity to the evening as everyone knew they were watching something special.

"Gasoline" was explosive as Anna Fullbrook (Violin) carved out the catchy violin line backed by the upright dancing bass line by Noah Harmon (Bass). Steven Chen (Guitars) and Mikel Jollett (Vocals/Guitars) had dueling acoustic guitars with Mikel employing a capo for a number of songs. Daren Taylor (Drums) knocked out the shuffling drum beat intro to "Missy" as Mikel and Steven jangled away on their acoustic guitars. "The Girls In Their Summer Dresses" was seamlessly adapted in the acoustic format as Mikel jokingly forgot how the song started. A flurry of cameras and cell phones popped into the air to record "Sometime Around Midnight" as the ovation at the end of the song was deafening. The crowd demanded an encore as the band prefaced their rendition of "The Winning Side" by saying they had never performed the song acoustically. The line for autographs nearly went out the front door of Fingerprints as the band graciously took lots of time thanking their fans by signing their newly purchased cd. I will admit it. I got mine signed.
Posted by Amateur Chemist at 8:51 PM