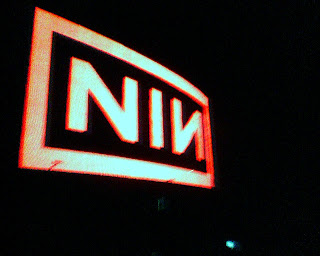 A Place To Bury Strangers buried the audience in an avalanche of feedback and white noise. I was curious to see how their sound would translate in a big arena. The teenage girls in front of me quickly plugged their ears as Oliver Ackermann (Guitars/Vocals) dialed up a storm of fuzz. "Don't Think Lover" sounded utterly massive as Oliver continually crushed his tremolo arm to add extra waves of sound. My head nearly exploded during "To Fix The Gash In Your Head" as a dramatic swirling fuzz tornado blared over the speakers. The crowd in Oklahoma quickly got the idea of what they were in for and the applause grew louder with each completed song. "I Know I'll See You" was a seizure inducing blast of strobes that hypnotized you as the sound was enveloping. It is crazy to think I saw them at Spaceland not too long ago and now they are opening for Nine Inch Nails. They made a lot of new fans on this particular night. I fully expect the trend to continue in Texas.

The private Nine Inch Nails show a few weeks ago will be one of the best shows of the year. I knew what to expect from this particular show but I am still amazed how powerful a performance Nine Inch Nails puts together. It is an aural and visual feast that overloads your senses. I hate comparing audiences but must give credit to Oklahoma for being a crazy enthusiastic bunch of fans. As expected they moshed heavily for the bigger tunes "Closer", "March of The Pigs" and "Wish".

"999,999" gave way to the fierce drum bashing of "1,000,000" as Josh Freese (Drums) is one of the many important parts in the Nine Inch Nails machine. "Letting You" continued the aural bludgeoning as Trent Reznor (Vocals/Guitars/Synthesizers) added some creepy distortion to his vocals. The mosh pit went bonkers when the opening drum beat of "March Of The Pigs" started up as if it were a call to arms. "Head Down" is easily one of my favorite songs off The Slip and sounded excellent as Robin Finck (Guitars) had the guitar tone dialed in with his baritone Danelectro guitar. Trent really started to get into the show as he tossed his tambourine into the crowd and went crazy with a Gameboy sounding glitch break down to close out the song.

"Gave Up" is one of the many impressive displays of their light show as bright blinding red and blue lights flared as they lit up the Ford Center. "The Warning" sounded and looked amazing as they played in front of a large bank of LED lights that was carefully coordinated with the music. Trent was usually a mini megaphone to distort his voice at different points in the song. A small batch of songs from Ghosts slowed the show tempo down but gave the audience and the band a breather. I would like to point out that Alessandro Cortini (Synthesizers) rocked the harmonium during "Piggy". In a Nine Inch Nails concert first, an overzealous fan jumped on the stage and made it behind the LED screen. I strongly discourage this behavior as we all remember what happened to Dimebag Darrell. I am surprised the guy didn't get tackled by Trent.

"Head Like A Hole" is the classic live staple of Nine Inch Nails and is propelled by Josh Freese as his drumming on this song is nothing short of spectacular. Josh had been drumming for almost an hour and a half and he was still killing it. The encore seemed too short at six songs but I was getting greedy. "In This Twilight" is one of my favorite Nine Inch Nails songs and serves as a hopeful ending to the show even though the band is playing behind an apocalyptic looking picture of a city. Trent even mentioned he didn't remember Oklahoma ever being this crazy before. This told me that I wasn't the only person thinking it was a great show.

i was wondering if you'd be at the show in dallas. i'm leaving for tx on sun so i am going to try to catch the show on monday.

I Agree with your reviews. The show at the ford center was unbelievable. I have seen many shows there being a tulsa resident, but this show was not of the norm for a ford center crowd. The last time nin played there it was 99% sold out and girls in high heels and shimmering blouses on the floor every where. The show on the 15th was the real fans and maybe 60% of the joint sold out. None the less trent and the new line up put it down solid and and gave nothing less of 110%. The show was one of the best shows I have seen from nin in the 8 times I have seen them since 2005.