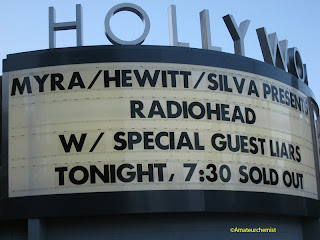 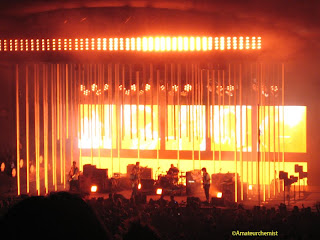 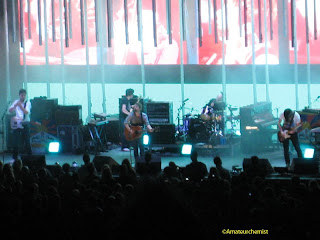 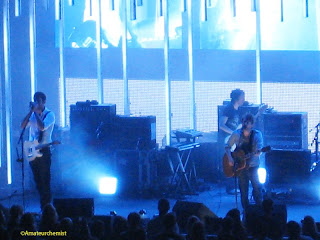 This night was significantly better. Radiohead garners immense respect for tweaking and switching up their setlist on a nightly basis. The constant shaking of "Reckoner" immediately stirred everyone from their seats. I specifically mentioned "Optimistic" in my review of the first night at the Hollywood Bowl in hopes they would play it on the second night. When I saw Thom Yorke (Vocals/Guitars/Keyboards) was handed his Fender Jazzmaster, I knew there was a chance. Red lights bathed the stage as the shimmering chords of "Optimistic" brilliantly rang through the bowl. The crowd seemed to really be alive at this point.

Jonny Greenwood (Guitars/Keyboards) immediately stepped behind the Rhodes keyboard for the melodious notes of "All I Need" as his brother Colin Greenwood (Bass) had his own keyboard for the bass lines while Thom was behind a piano. I failed to mention in my prior review that Jonny alternated between his violin bow guitar parts and the French Connection keyboard for some spooky theramin sounds to "Pyramid Song". Radiohead had an intense light show throughout the night but I particularily emjoyed the candlelight flickering during "Weird Fishes/Arpeggi" and the simulated rain storm during "The Gloaming". Thom also had some extra hollow distortion on his vocals for "Weird Fishes/Arpeggi" as Ed O'Brien (Guitars) added his trademark backing vocals.

"Talk Show Host" was a pleasant surprise as it is a live favorite with its simulated mellotron samples. Thom and Jonny tackled "Faust Arp" acoustically but threw me off again when they did "Tell Me Why" by Neil Young. "No Surprises" sounds like a glorious musical toy box as the guy standing next to me was singing way to loud. "The Bends" is a true Hollywood Bowl rocker and a perfect selection as the lyrics of "Where do we go from here?" simmered with irony. I got another spine tingling concert moment during "Bodysnatchers" as it seemed to be performed even faster compared to the previous night.

It seemed like they were only on stage for 20 minutes as they left the stage for a short break. Radiohead returned with "House of Cards" and another gem from the past with "Planet Telex". "Go Slowly" was another nice surprise as it is featured on my bonus disc of the In Rainbows box set. "Fake Plastic Trees" solidified this particular night as one of my more memorable Radiohead concert experiences. Thom came out by himself to tackle "Cymbal Rush" from his solo album which had him stop the song momentarily because he had forgotten how the song went. "Karma Police" brought the girl in front of me to tears as my whole section proceeded to sing along. "Idioteque" served as the knockout punch. I am now regretting I didn't get a ticket for San Diego but was at least smart enough to get tickets for the Santa Barbara Bowl.