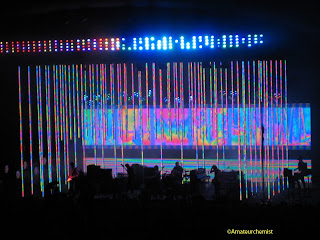 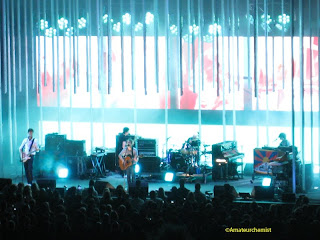 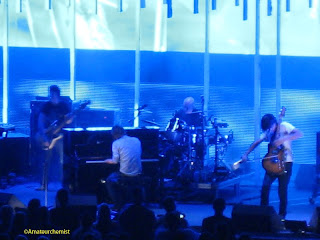 I missed Radiohead in the really early days but did manage to score a ticket to the Kid A tour at the Greek Theater in October 2000. The show at the Greek was mindblowing as I will never forget hearing "Optimistic" and "Just". I also remembered that people were in the trees in the very back of the venue. It was one of the few shows that the security guards flashed a black light on the back of the ticket to check for a specific hologram. I have caught Radiohead every time they have played Los Angeles since 2000 and managed to work in both San Diego stops on the last tour.

The Radiohead show had sold out in minutes and I was really surprised they didn't add a third show. A voluminous amount of people nervously waited outside the venue holding up a finger or two in hopes that someone had an extra ticket. The amount of people outside the venue could have easily been a thousand or more either trying to get an extra ticket or to listen to the show. I unfortunately missed Liars due to the traffic but I am sure Angus put on a stellar show judging by how intense their show was at the El Rey earlier this year.

A dimming of the house lights caused an uproar from the max capacity crowd. My section did not stand up like I expected and I got a text from one of my friends saying they were surprised that everyone wasn't standing. "15 Step" was all I needed to hear to get me out of my chair as I kept a close eye on Jonny Greenwood (Guitars/Keyboards). Jonny tossed in a short but sweet abstract delay soaked noise burst near the end of the song. When the roadies came out with some extra drums, I immediately knew it was time for "There,There" as Thom Yorke (Vocals/Keyboards/Guitars) had a vintage Gibson Hollowbody dialed in with a gritty tone. A Rhodes Keyboard Piano was rolled out for Thom as he delicately tapped the out the haunting notes to "Morning Bell". Jonny would later position himself behind the Rhodes for "All I Need" as Thom was seated in front of a piano.

Jonny would later grab a violin bow to apply to his guitar for some alien textures before switching over to his custom Analogue Systems rack of modular synthesizers and his French Connection. Radiohead went introspective with a trio of slower songs before cranking up the intensity with a schizophrenic version of "Weird Fishes/Arpeggi". Phil Selway (Drums) was a time keeping machine in the background never missing a beat while Colin Greenwood couldn't stop smiling the whole time on stage as he would enthusiastically wave hello to the crowd.

"The Nation Anthem" was prefaced with its usual random radio dialogue interspersed with the gigantic roaring Colin bass line. I got a rare spine tingle during the ending of the song due to its chaotic noisy ending. Jonny and Thom tackled "Faust Arp" acoustically which sounded spot on. Jonny would later really cut loose for "Jigsaw Falling Into Place" as the song builds and later implodes. "Idioteque" got a large number of people out of their seats with its heavy atmospheric synthesizers and feverish drums. "Bodysnatchers" separated the mind from the body in that your mind was blown and you were probably dancing.

"Videotape" still sounds similar to the opening piano riff from "The Young and the Restless" from the 1980s. I give you proof here. "Paranoid Android" was another crowd favorite with Ed and Jonny methodically deploying the loud guitar noise bursts of the song. Radiohead did not miss a note until Thom flubbed his part in "Street Spirit(Fade Out)" which he commented with "Bollocks". It was nice to see that Radiohead was actually human. I still remember hearing the intro of "House of Cards" a billion times during the NBA playoffs as it was included in the commercials. The second encore consisted of "Lucky" and "Everything In Its Right Place". Ed and Jonny were kneeling in front of their pedal boards chopping up samples of Thom's voice and inserting Thom's voice back into the song as Thom rose from his Rhodes keyboard and waved goodbye to the crowd. It was a picturesque night for a Radiohead show and made me thankful to be able to catch the show again on Monday.

Encore 2:
"House of Cards"
"Lucky"
"Everything In Its Right Place"
Posted by Amateur Chemist at 10:58 AM

.... it saddens me to report that those same, well-meaning festival volunteers were attacked outside of Radiohead's Hollywood Bowl performance Monday night.

The harrowing scene is depicted vividly in Randall Roberts' report for the LA Weekly.

Basically, F Yeah Fest founder Sean Carlson, promoter Phil Hoelting and filmmaker Robert Reich were allegedly stationed outside of the Bowl Monday night, distributing flyers for the weekend festival when they caught site of a grizzly altercation between Bowl security and a concertgoer. Reich -- who was filming the scene for an upcoming F Yeah documentary -- captured much of the action on camera. What followed was a disturbing chase down Highland Blvd, in which Carlson and Reich were physically attacked by security guards. The tape was confiscated and the young men were left bruised and bewildered -- Carlson's cell phone and keys were stolen.

A sad situation to say the least. If any Set List readers witnessed this event, please leave your account in the comments section.