Mudvayne at the Wiltern Theatre 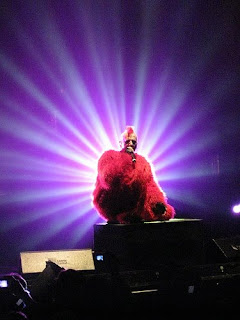 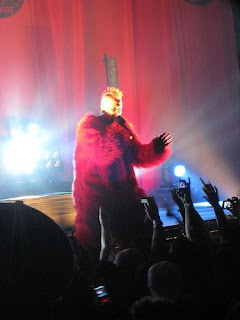 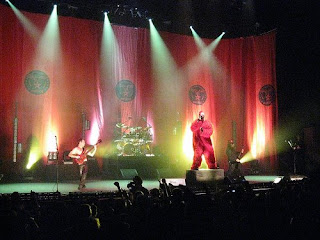 While I wished I could have attended Mudvayne at the Wiltern, I sent my Heavy Metal loving brother who checks in with the following report:

It is my pleasure to review Mudvayne, as the Amateur Chemist was too busy to attend [ed note: I was at the Echoplex for Earlimart and the Afternoons]. Having seen them many times before, I was really looking forward to watching them play Los Angeles. I bought my ticket early as the Hollywood Palladium, in my opinion, is a “small venue” for them, only to find out the venue was changed to an even SMALLER Wiltern Theatre. Must be a sign of the times.

I have to say that I think Mudvayne is one of the most underated Metal bands next to Armored Saint. Each band member is a phenomenally talent artist is their own right and I’m surprised they don't have a larger following.

Snot/10 yrs – I remember seeing Snot open up for Machine Head for the The More Things Change tour, System of a Down were also on the bill and were selling demos with "War" (which were sold out before I could pick one up). I wasn't surprised to see Shavo Odajian backstage cheering them on. Snot did a great job and had the crowd really pumped as they closed out their set.

I hadn't heard of 10 Years before, so was interested to see what they had to offer. Sorry, but not impressed. I was trying to think of how to describe their sound and elements of Tool came to mind although not a good version. I wasn’t surprised when I saw the guitarist bring out a Gibson Les Paul Silverburst like Adam Jones (Guitars).

Having seen HellYeah kick a$$ on their tour last year [ed note: Hellyeah at the Grove was sick], I was really excited to see the Mudvayne gang back together. The tiered Wiltern is a great venue to check out bands, making any spot a good seat. I was wondering how much new material would be played given the new album “The New Game” won’t be released until November 18th. I streamed it a couple of times and like it so far.

Chad Gray (Vocals) came out in an all red furry suit, read VERY HOT, with his face painted in vintage "Dig" music video styling on one side. I was thinking he would don the suit for a couple of songs, but he finished the entire show with it. Very impressive.. or very stupid. They put on a great show and I was glad to see them play a lot of tunes off of L.D. 50.

As an ardent student of the bass, I was in awe watching Ryan Martinie (Bass) jam away throughout the night. Freaking crazy! They need to have some Mudvayne songs on Guitar hero or Rock Band! Chad seemed to be getting his voice back and struggled at times throughout the show, but still held his own. I am always impressed with Greg Tribbett's (Guitars) efficiency as both his hands seem to move very little, but he gets great sound and speed out of his rig.

Overall a great show with a solid setlist. I would have kicked myself if I missed this one.

OT – As an avid Deftones fan, I also had the pleasure of attending the Deftones secret show at Spaceland with the Amateur Chemist. Sending my best wishes to Chi Cheng. My thoughts and prayers are with you.
Posted by Amateur Chemist at 8:45 PM