The Dears and The Secret Machines at the Key Club 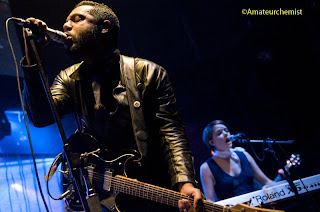 Two bands with significant member changes appeared at The Key Club while promoting their new albums. The Dears recently released Missiles on Dangerbird Records, while The Secret Machines put out their third album Secret Machines. 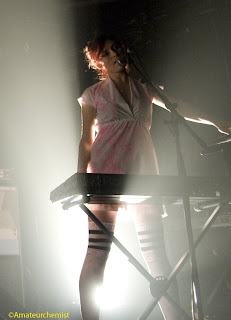 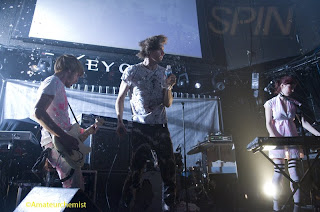 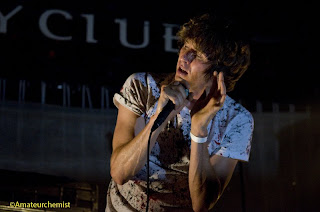 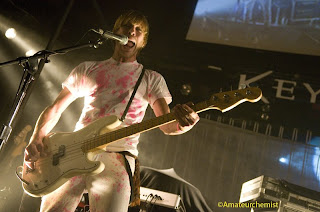 The Bathroom Murders seemed to be a little out of place on the bill. I wasn't expecting screaming lyrics, distorted bass lines and glitchy keyboards. They label their music as grime, but it was more of a damaged art electro punk vibe. I was listening to The Dears on the way to the show, so my frame of mind was decidedly not ready for their confrontational set. 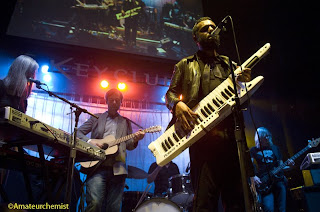 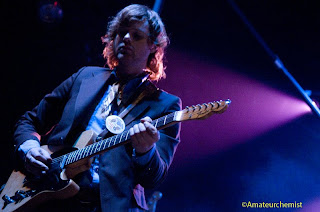 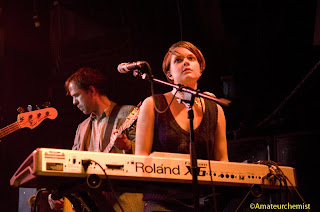 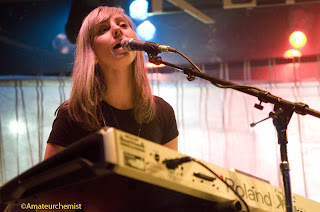 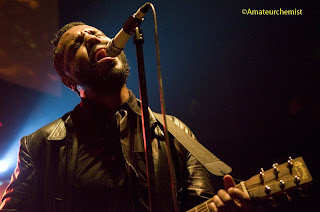 A lush cascade of guitar swirls very reminiscent of the Doves filled the Key Club as The Dears took the stage. Murray Lightburn (Vocals/Guitars) strummed the translucent guitar chords to "Disclaimer" backed by ensemble of new band members. Murray and Natalia Yanchak (Keyboards) are the only remaining original members of The Dears.

The lyrics to "Money Babies" resonated as strongly meshed with its accompanying music as Murray emphatically sang "Our money is elastic". Murray's voice is definitely the centerpiece of all of their songs. In the live setting, Murray's voice shines brighter while being backed by bandmates. Laura Wills (Keyboards) and Natalia both had a Roland Fantom X6 keyboard in their setup but Natalia had a Nord Electro underneath the Roland keyboard. "Lost In The Plot" sounded as intricate as the recorded version while Murray had a death grip on the microphone stand as he sang.

The slow quiet intro to "Demons" later would ignite into a fiery guitar solo as the band exonerated the audience of their demons. Murray would later don the keytar for the bass notes of "Meltdown In A Major" to close out their set. Murray and the band were shaking hands with signing a few autographs as the cheers for an encore was silenced by the DJ spinning some more tunes. The new line up seemed to reinvigorate Murray and Natalia as evidenced by their gripping set. 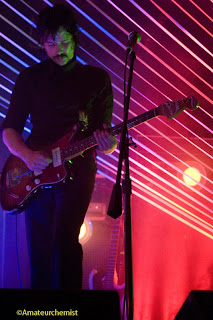 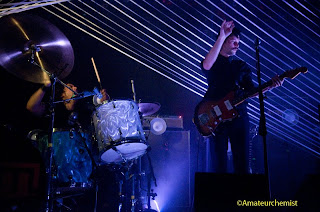 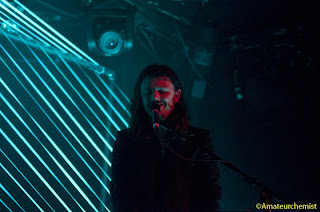 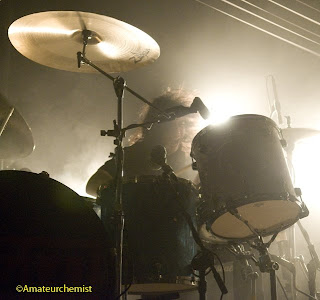 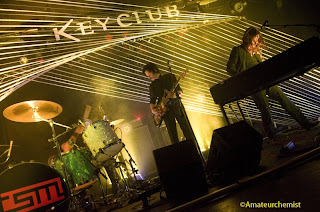 The Secret Machines had their minute share of member changes as Ben Curtis (Guitars) moved on to form the School of Seven Bells. Ben has been replaced by Phil Karnats (Guitars). A large metal skeleton was setup to hold the elastic bands while creating their visually intriguing stark lines. The Secret Machines merch table had a bunch 3d glasses that were distributed to the audience.

My expertise in playing the drums is limited to Rock Band but must say that Josh Garza (Drums) was worth the price of admission as he throttled his drum kit with drum sticks that looked like miniature scale baseball bats. Brandon Curtis (Bass,Keyboards,Vocals) had an 8 string Hagstrom bass that sounded evil. It was so dark that couldn't see what effects he had over in his corner.

Phil had an assortment of guitars including a Fender Jazzmaster as he sliced out the guitar octaves for "Nowhere Again". The Secret Machines tend to stretch out their already epic songs into extended jams which can be good or bad depending if you like the particular song. "Have I Run Out" was one of the new songs they played that the audience seemed to be into as I noticed people rocking out behind me. "The Fire Is Waiting" morphed beyond a jam into opus territory as they stretched the song as tight as the elastic bands on stage. "Alone, Jealous, and Stoned" from their second album Ten Silver Drops garnered a number of howls from the appreciative fans. The closer was rightfully placed in the form of "First Wave Intact" as Josh was still pounding away with limitless energy. I would have attended Spaceland the next night if I hadn't already committed myself to seeing Helmet at the Viper Room.
Posted by Amateur Chemist at 11:43 AM

Email ThisBlogThis!Share to TwitterShare to FacebookShare to Pinterest
Labels: Key Club, The Dears, The Secret Machines