Coldplay at the Honda Center 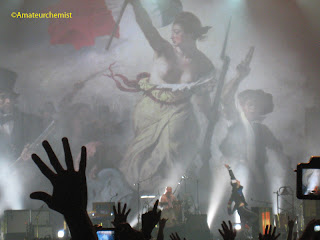 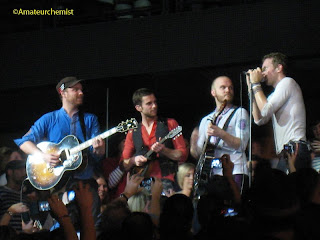 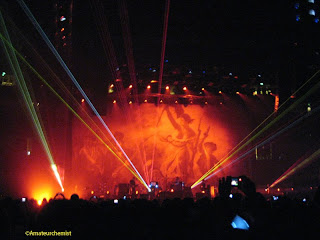 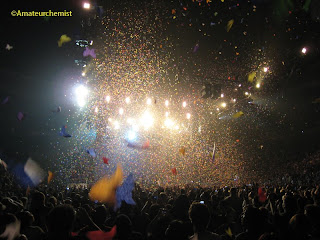 Coldplay closed out their tour of the States after kicking it off back in July at the Forum.

Sleepercar went on stage close to 7:30 sharp which was a shame as most people missed their Texas tinged alternative country flavor. It wasn't the first time seeing Jim Ward (Vocals/Guitars) at the Honda Center as I remembered going to see Jim in Sparta when he opened for Incubus when it was dubbed the Arrowhead Pond. Sleepercar unveiled a batch of songs from their debut album West Texas and threw in a cover of The Flying Burrito Brothers "Older Guys".

Jon Hopkins was up next with his electronic textural washed DJ set. Jon co-produced a couple of tracks from the newly released Coldplay EP Prospekts March. Jon played a similar set to his Forum gig and I would have preferred he opened the show as it brought down the energy level from Sleepercar.

Having witnessed a number of Coldplay performances over the years, I wasn't as impressed compared to the OC Register and OC Weekly. I felt Chris's voice was a little off. Chris was emphasing some of the notes in the songs differently. It could have been me but the excitement and electricity wasn't as elevated compared to the Forum show. The only moment were the intensity was matched was during "Viva La Vida". Here is a rough timeline of the events:

9:22 Que the lasers, it is time for "Clocks". Chris has a delay effect on his piano.

9:48 A blue wash of lights blare as Chris changes the lyrics during "Fix You" stating you are in "row 57 at a Coldplay show"

9:58 Coldplay relocates to middle of the floor for a mini-electronic set of "God Put A Smile On Your Face" and "Talk". Will Champion hits his electronic drum kit in a way that reminds me of Portishead's "Machine Gun".

10:04 "The Hardest Part" where Chris laments his age at 31 and that he isn't as talented as the Jonas Brothers.

10:06 Chris flubs the lyrics.....audience appalause and cheer at the show of humility.

10:09 "Viva La Vida" despite how many times you heard the song, it is epic in the live setting.

10:17 Ushers put up caution tape and line the floor.

10:18 Coldplay runs down the floor to the back of the arena for an acoustic version of "The Scientist".

10:28 The crashing piano chords of "Politik" raise the energy level.

10:36 I am showered in hundreds of paper butterflies.

Coldplay setlist at the Honda Center (11/25/08)
"Life In Technicolor"
"Violet Hill"
"Clocks"
"In My Place"
"Speed of Sound"
"Cemeteries of London"
"Chinese Sleep Chant"
"42"
"Fix You"
"Strawberry Swing"
"God Put A Smile On Your Face"
"Talk"
"The Hardest Part"
"Viva La Vida"
"Lost!"
"The Scientist"
"Death Will Never Conquer"
"Politik"
"Lovers In Japan"
"Death And All His Friends"
"Yellow"
Posted by Amateur Chemist at 12:44 AM