Earlimart and Afternoons at the Echoplex

A new era dawned with the debut of Check One Twosdays at the Echoplex. As much as I enjoyed the light setup at the Viper Room, the Echoplex will draw a larger audience for those who were unwilling to make the trek down the Sunset Strip.

It is hard to believe that I have been attending these Check One..Two nights dating back to August 2007 when I saw Gliss, The Moderates, IO Echo and the Black Kites. Mr. Shovel has long been a champion of the local scene and I would speculate his presence forced KROQ to introduce their Locals Only program with Kat Corbett. 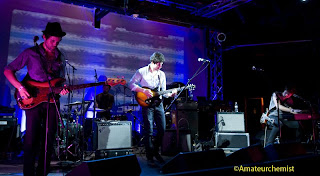 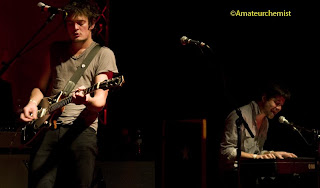 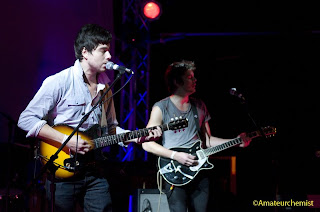 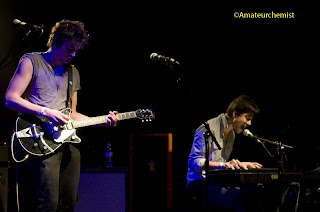 Red Cortez proctored in the new spirit of the Check One Twosdays, as it was one of their first shows having previously being known as The Weather Underground. I caught the tail end of The Weather Underground when they opened for the Airborne Toxic Event at Spaceland and was impressed with the conviction of Harley Prechtel-Cortez (Vocals/Guitars).

Red Cortez had a batch of songs that mine the same Americana dirty blues rock as Delta Spirit, Cold War Kids and the Walkmen. I didn't catch too many song titles but I do remember the southern tinged gristle of "Neal Cassady". Calvin J. Love (Guitars) eschewed traditional guitar parts as he added oblique lines to the locomotive driven songs. Red Cortez will be stopping by the Detroit Bar on December 6th when they open for Little Joy. 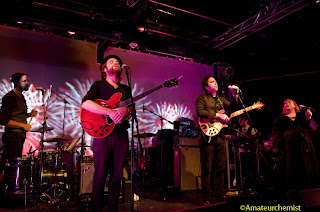 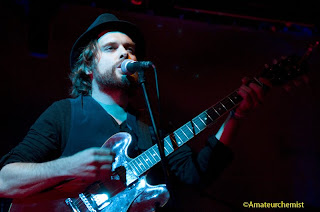 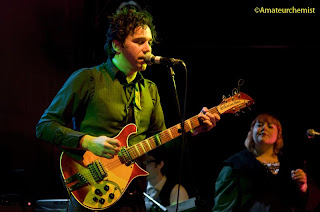 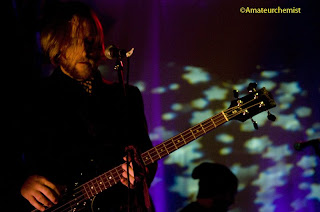 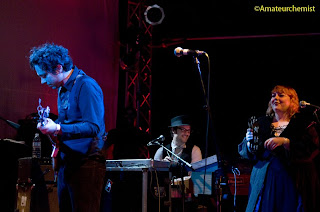 As sad as I was to see the demise of Irving, Afternoons have tapped into a sound that is refreshing. I wouldn't be surprised if Dangerbird records steps up to the plate to sign them and release their debut album. A slow swirl of keyboards kicks off "Love is A Western Word" until Claire McKeown (Vocals) unfurls her operatic range and the guitars crash into the song. Brian Canning (Vocals/Guitars) handles the vocals with a deliberate pace as he strums his Gibson Hollowbody guitar.

If I could choose one song to be played at Barack Obama's inauguration, I would easily choose Afternoons's "Say Yes". I might have speculated that they wrote this song after Obama's victory if I previously hadn't heard the song. A wave of hope and positive reaffirmation infuses your soul upon hearing the smorgasbord of sounds. Afternoons had a four song EP available, but I hope to hear their full-length debut album soon. 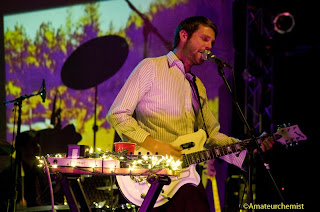 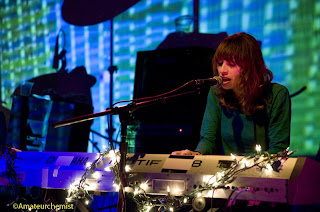 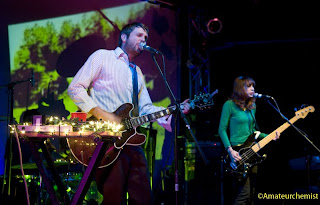 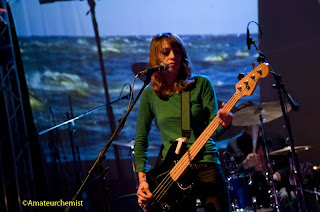 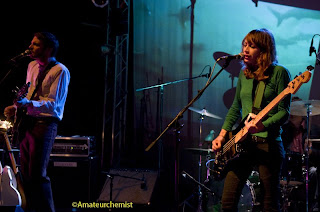 How is it that I keep missing Earlimart? Aaron Espinoza (Guitars/Vocals) and Ariana Murphy (Bass/Keyboards) are the two principle members of Earlimart. They have been quite prolific releasing Mentor Tormentor and Hymn and Her within a year. Earlimart has a cinematic twinkle to their songs as I can imagine each of their tunes being incorporated into television or movies.

A crisp combination of breezy guitar chords formed the skeleton of "For The Birds". Aaron and Ariana carefully interweave their vocals together that complement the subtle bubbling keyboards. "Face Down In The Right Town" has the guitar structure similar to that of a lost Grandaddy song, but is carried to loftier heights with Aaron's soaring vocals. Aaron introduced "The Movies" as a song named after the locally worshipped music troupe. The fuzz came to the forefront with "Susan's Husband's Group" as Aaron switched to a Fender Jaguar. It was tempting to leave on a very high note but I soldiered on to see what was next. 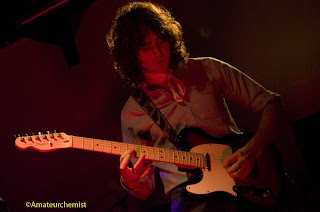 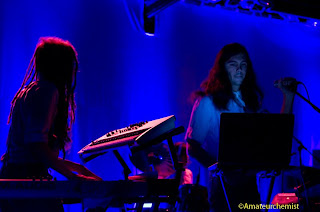 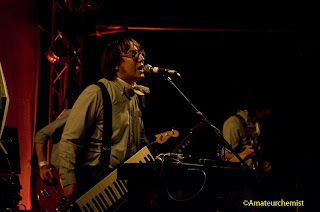 A long change over occurred before Dazzler was finally ready to play. If your prior band name was Totally Radd, you have a lot to live up to in the name department. It was really late, but this did not stop some fans from crowding the barricade ready to take in some party jams. I stayed because I saw them setting up a Hohner Planet T keyboard, a keytar and an electronic drum set. Dazzler did throw down with their synthesizer heavy groove anthems with judicious use of the vocoder. "Cold Mountain" is a good example of their display of keyboards. Dazzler will be closing out every night of this month for the Check One Twosdays at the Echoplex.

Next week's Check One Twosdays looks to be a packed house for Everest, The Henry Clay People, Nico Stai and Dazzler. I am trying to switch my work schedule to make sure I can catch this show.
Posted by Amateur Chemist at 12:00 AM

Hey, really enjoy Amateur Chemist. I live in the LA area and thought I'd just let you guys know about this show that's coming up at
The Echo. I got wind of this guy named Rodriguez recently from a friend. He's been around for a long time, but just had his first album reissued and is now touring in support of it. This dude is in his mid-60s and this is the first time he's played west of Detroit. It's weird like psych folk soul and is really pretty amazing.

He's playing in LA on the 21st at The Echo and SF on the 23rd at The Great American Music Hall (with The Entrance Band).

I don't know, I hadn't heard anything about it very many of the local blogs and thought that I'd just spread the word as I thought people would really interested in this.

Hope this gets a few more folk out at the show.