Helmet at the Viper Room 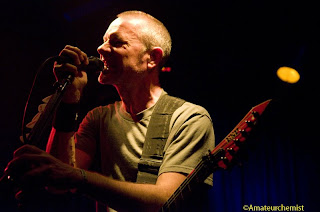 “Driving Nowhere Fast” was my theme song as I braved an insane amount of traffic to see Helmet and Totimoshi at the Viper Room on Halloween night. My show count for Helmet is rapidly climbing as this will be my tenth show reviewed let alone the countless times I have seen them dating back to 1992. I previously caught Helmet at the Viper Room in January of 2007 which was the main reason why I couldn’t pass up the opportunity to see one of my favorite bands up close. 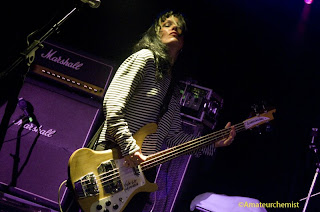 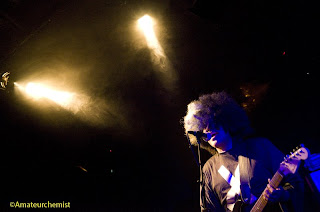 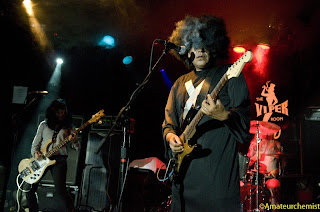 Talk about déjà vu. Totimoshi was in the Halloween spirit as Tony Aguilar (Guitars, Vocals) was sporting the frizzy fro of Buzz Osborne from the Melvins. I remember seeing the Melvins open for Helmet during the Aftertaste tour. Totimoshi has a new album Milagrosa which was produced by Page Hamilton from Helmet.

Tony had a shiny new Fender Stratocaster that may have been a baritone judging by heaviness of his riffs. “The Drunken Sun Forever Watching” from the album Ladron got the costumed crowd going with its sludgy feel. Meg Castellanos (Bass) had a Rickenbacker bass adorned with a Viva Totimoshi sticker that hummed along during “Sound The Horn”. It was hilarious to see Tony’s hair bounce around during the pounding of “Viva Zapata”. Totimoshi sufficiently warmed up the crowd for the ensuing onslaught by Helmet. 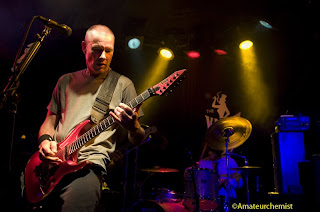 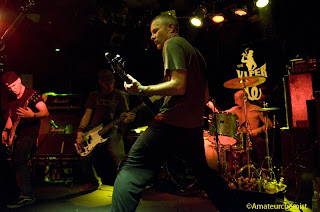 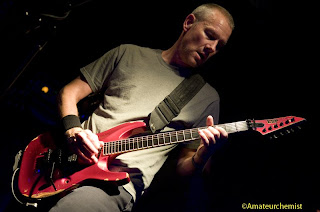 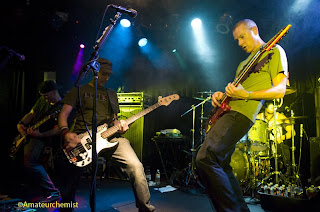 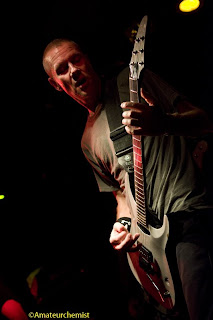 It has been quite the year for Helmet. Instead of playing greatest hits styled set lists, Page and company have been tackling whole albums during their performances. I heard the entire album Aftertaste in San Diego at Canes. Meantime was performed from start to finish just up the street at the Key Club.

It seemed like a normal set as Helmet tackled “Swallowing Everything” from the album Monochrome. A blistering double set of “Renovation” and “See You Dead” made me realize I made the right decision of sitting in traffic as Helmet was sounding razor sharp. “Iron Head” was unreal as some pushing near the front of the stage started to break out. The guitar riff from “Crashing Foreign Cars” is a top ten Helmet riff as Page screamed “Crash this car!” I couldn’t even remember the last time I heard “Clean” from Betty. Page later stated that they hadn’t played the song live since 1997.

The gauntlet was thrown down when Page then announced they were going to play Strap It On in its entirety. My mind was officially blown at this point. The staccato riff to “Repetition” was insane. Page dug deep to accomplish the screams for “Rude”. The breakdown riff of “Sinatra” was flawlessly pulled off as one of the audience members commented on the sharpness of the band. Page usually declines requests to play “Sinatra” by stating it is a Deftones song since they covered it as a B-side. The crushing encore consisted of "Milquetoast" and "Role Model" which had me already counting the days till their show at the House of Blues Anaheim on November 12th with Fu Manchu.
Posted by Amateur Chemist at 12:00 AM

Sounds like a good Halloween. Mine was spent at Rise Against and Thrice at the Palladium. Review is here: http://zachinvain.blogspot.com/2008/11/rise-against-hollywood-palladium.html

Did they really play 'MURDER' (the final track on 'Strap It On' and totally insane)?