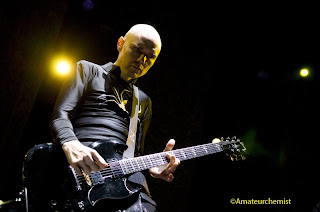 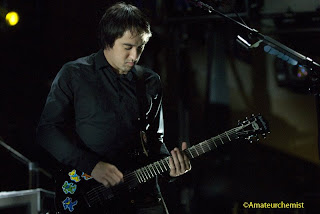 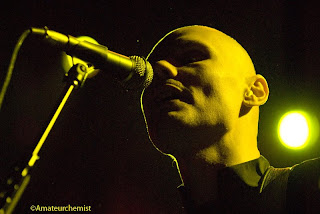 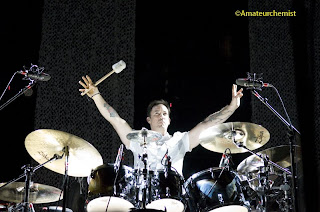 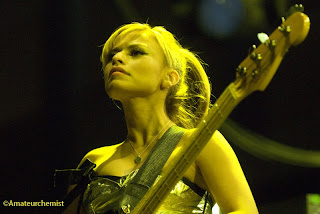 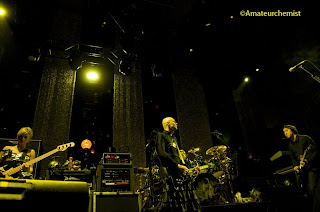 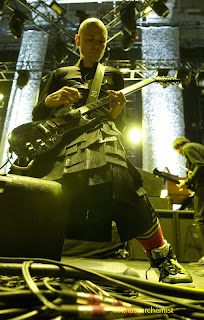 Smashing Pumpkins are in the midst of their 20th Anniversary tour playing setlists that are tailored to their devout fanbase. Billy Corgan (Vocals/Guitars) donned his Tony Iommi Gibson SG and the earth started to rumble with the Black Sabbath inspired "Superchrist". Jeff Schroeder (Guitars) was wielding a black Washburn guitar that augmented the crushing sludge of the detuned guitar riff.

"Bodies" is one of my favorite songs from Mellon Collie and the Infinite Sadness and sounded pristine as the band was razor sharp. Smashing Pumpkins has added quite a number of touring members in the form of the horn section from No Doubt who gave "Tonight, Tonight" an orchestral feel. "Eye" was transformed from its throbbing sparse electronic version to a bass driven rocker as Ginger Reyes (Bass) plucked away.

"I of the Mourning" had some subtle washes of keyboards from Lisa Harriton who was surrounded by her Roland and Moog keyboards. "99 Floors" had Billy use a capo on his acoustic guitar for the gliding propulsive riff. Billy did mention to the crowd that San Diego has always treated the Smashing Pumpkins well to which the crowd responded with a large ovation.

The quiet opening notes of "Soma" transported me back to the days of Siamese Dream as I tried to emulate the notes on my first guitar (Black Squier Fender Stratocaster). My jaw dropped as Billy stomped on his guitar pedal controller for a psychedelic backwards delayed guitar solo. It cleared any doubts of why you can play Billy Corgan in the Guitar Hero video game.

Billy would later use his Custom model Fender Stratocaster for a knockout rendition of "Cherub Rock" that had people crowd surfing like it was the nineties. The metal tinged "Zero" was caustic as the band momentarily dropped out as the crowd screamed "Wanna Go For A Ride!" Jeff also got huge points for his off kilter Digitech Whammy solo during the song. Jimmy Chamberlin (Drums) looked like he was barely breaking a sweat with his jazz influenced expert drumming behind the kit.

"Heavy Metal Machine" roared as Billy switched back to his Tony Iommi Gibson SG. I was hoping for a second encore after they wrapped up "The March Hare" but the house lights went up to the dismay of the audience. Make sure your buy your tickets for the Tuesday 12/2 show or Wednesday 12/3 show. Different setlists guaranteed at both shows.

Smashing Pumpkins setlist at the RIMAC Arena (11/30/08)
"Superchrist"
"As Rome Burns"
"Bullet With Butterfly Wings"
"Bodies"
"Gossamer"
"Tonight,Tonight"
"Eye"
"Tarantula"
"G.L.O.W"
"A Song For A Son"
"I of the Mourning"
"99 Floors"
"OWATA"
"The Rose March"
"MCIS Theme"
"Soma"
"Cherub Rock"
"Zero"
"Heavy Metal Machine"
"Glass"
"Set The Controls" (On the setlist but not played)
"The March Hare/Suffer"
"United States" (On the setlist but not played)
Posted by Amateur Chemist at 8:15 AM

Thanks for the setlist and pics!

Such a great show last night!