Longwave at the Casbah 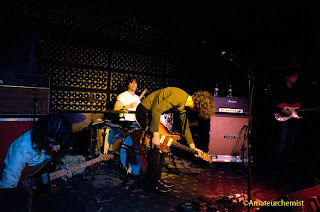 Longwave can't seem to catch a break. As the year wraps up and a number of best-of lists unfurl, many people will overlook their strength of their new album Secrets Are Sinister. I have been waiting forever to see Longwave and previously had to settle for seeing Steve Schiltz (Vocals/Guitar) play guitar for Albert Hammond Jr. 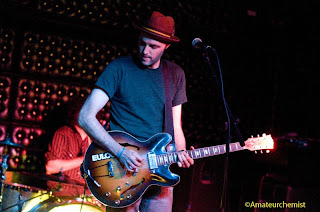 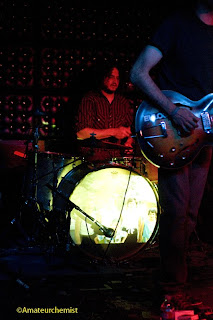 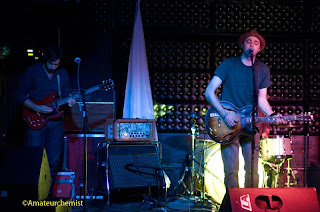 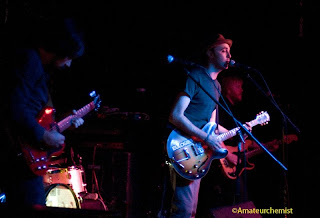 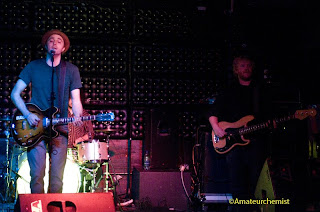 Eulogies are embarking on a mini-tour opening up for Longwave, as they continue to support their new EP Tempted To Do Nothing. Apparently, the Casbah is not known for starting on time but Eulogies hit the stage at exactly 9:00 to the sparse but appreciative crowd.

Eulogies weren't restricted by volume like when I caught them at The Hotel Cafe. The hopscotch bass line by Tim Hutton (Bass) for "Under The Knife" kicked off Eulogies rock solid set. I have to echo my prior observations that the additional guitars by Drew Phillips rounds out their collective sound and gives Peter Walker (Guitars/Vocals) a chance to focus on his vocals and rhythm guitars. "Running In The Rain" was another polished rocker from their self-titled debut album released on Dangerbird records.

Drew displayed some momentary tambourine skills for "Is There Anyone Here?" as Chris Reynolds (Drums) added a shuffling beat. "Bad Connection" is my choice track from the their new EP as the lyrics seem to resonate with me. Eulogies also set up a slide projector displaying vintage slides from the '60s or '70s that provides a visual aesthetic to their show. Catch Eulogies on December 16th at Space 15 twenty when they headline "A Pablove Supreme" which is a benefit show for Pablo Castelaz who is undergoing chemotherapy treatment for Wilm's Tumor at CHLA. 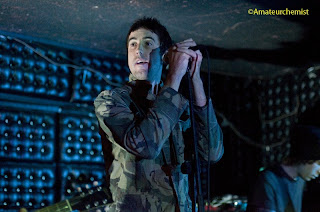 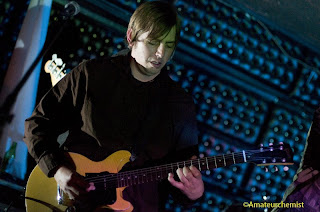 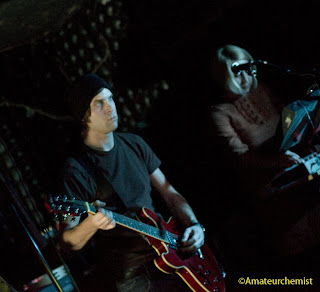 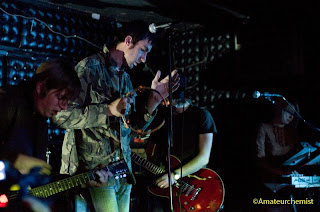 Local San Diego space psychedelic troupe A Beautiful Noise had a collection of five video cameras filming their textural performance. A Beautiful Noise overcame some gear problems prior to their start as the white backdrop for their projections wouldn't stay attached to the back wall and they had to borrow a guitar from Longwave. Luckily, these hurdles didn't hinder their psychedelic swirl. I was already thinking they sounded like Spacemen 3 before they proceeded to perform a cover from the band. I didn't catch any names of their songs but it will be interesting to see if they release their performance on DVD. 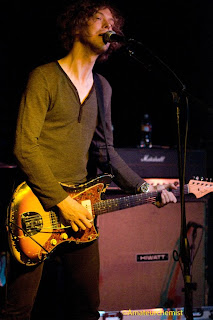 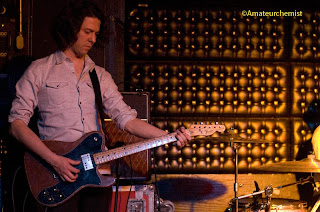 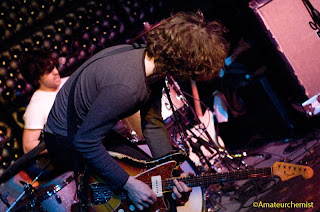 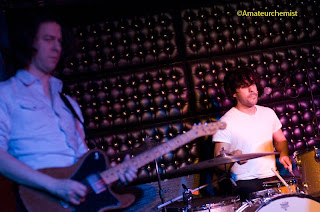 After listening to the new album Secrets are Sinister twice on the drive to San Diego, I was convinced that Longwave would need keyboards to fill out the textures in their effort to recreate the sprawling sounds that they recorded. I shouldn't have underestimated the guitar playing of Steve Schiltz (Vocals/Guitars) and Shannon Ferguson (Guitars).

"Sirens In The Deep Sea" howled from the start, as Steve should be mentioned with the likes of Adam Franklin and Kevin Shields for his tremolo abilities on the Fender Jazzmaster. Jason Molina (Drums) quipped he was having a "bad snare day" when his snare snapped during the beginning of "No Direction". Steve proceeded to summon a storm of feedback as Jason quickly changed his snare drum and stormed back into the song.

Shannon was playing a Fender Telecaster deluxe into a Vox AC30 to compliment Steve's Marshall amplifier and Hiwatt cab setup. I would venture to say Shannon's secret weapon in his pedal board would be a vintage DOD analog delay that was absolutely intoxicating. "Wake Me When Its Over" had Longwave venture back to its first album and was outstanding as Morgan King (Bass) had a fat cutting round bass sound that carried the atmospheric guitars.

The palm muted guitar notes of "Eyes Like Headlights" added some tension to the song before Steve went into a noisy feedback freak out. Steve prefaced "The Devil And The Liar" by stating they were asked to license the song for a Lubriderm commercial. Since Longwave isn't super huge yet, I have to support their creative ways of earning income as long as it helps them make more music.

The guitar instrumental "Daysleeper" was replicated perfectly in the tone department and washes over you when it reaches its noisy apex. Longwave landed the knockout punch with a double dose of "Tidal Wave" and "Life Is Wrong" to close out the evening. I wasn't too surprised they played nothing from their second album There's A Fire, but still think "Underneath You Know The Names" is one of their stronger songs. I think the new Longwave album Secrets Are Sinister will be the stocking stuffer for my friends this year. 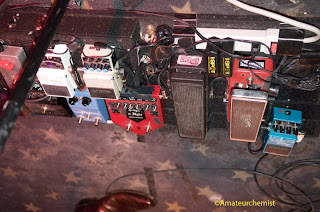 Posted by Amateur Chemist at 3:24 PM