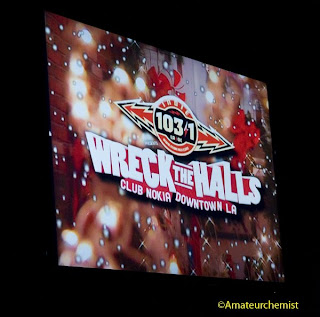 It is that time of year again. Radio stations across the nation throw together holiday gatherings that serve to close out the year. Indie 103.1 had their annual Wreck The Halls show relocated from the Avalon to the swanky new Club Nokia to put together an eclectic line up that had a bit of something for everyone. 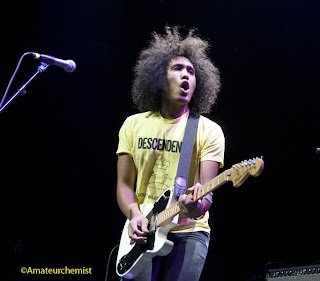 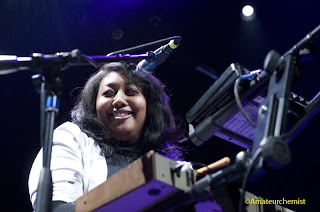 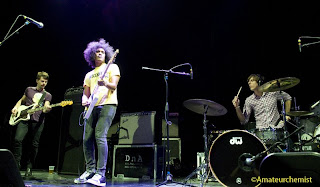 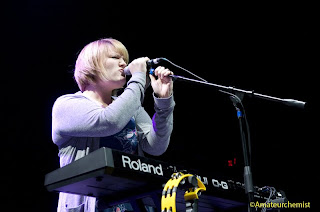 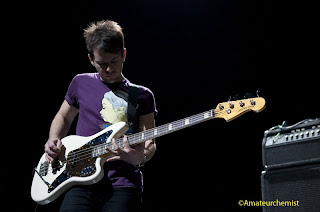 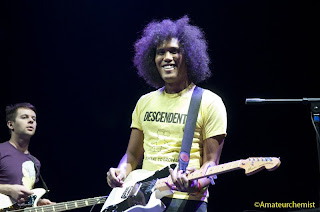 A can of opened Red Bull at the feet of Ali Youngblood (Keyboards/Vocals) symbolically represented the youthful vigor of Black Kids. Her brother, Reggie Youngblood (Vocals/Guitars) was clad in a vintage yellow Descendents t-shirt as the former Pitchfork darlings shook things up to kick off the show.

I don't own their debut album Partie Traumatic and was only familiar with a couple of songs but should mention I was surprised to see Bernard Butler of Suede produced it. The four on the floor disco beat of "Look At Me" had the kids dancing as Ali was playing her microKorg Keyboard alongside Dawn Watley (Keyboards/Vocals) who was tweaking the knobs on her Roland Juno-G.

The collegiate cheers of "Hit the Heartbrakes" were reminiscent of The Go! Team combined with a hefty dose of sugary synthesizers. "Hurricane Jane" was pure eighties nostalgia with wire like guitars and breathy female background vocals. The collective hipster community counted down for "I'm Not Gonna Teach Your Boyfriend How To Dance" as I think they lifted the opening keyboard riff from The Cure. Black Kids made a lot of noise but will have to step it up for their second album before the Red Bull wears off. 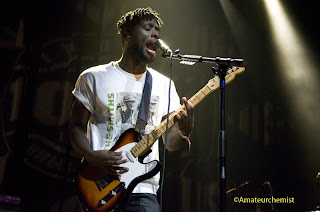 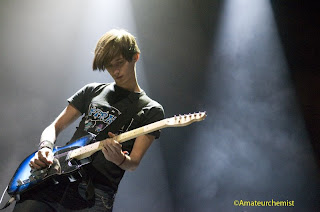 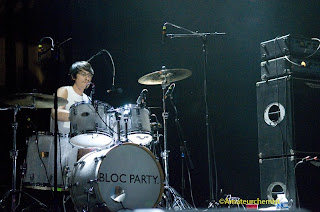 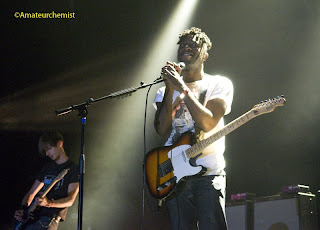 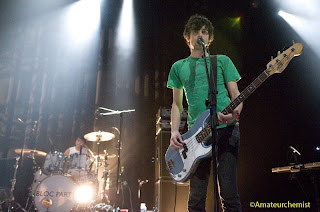 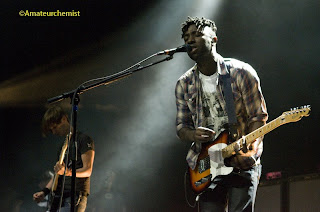 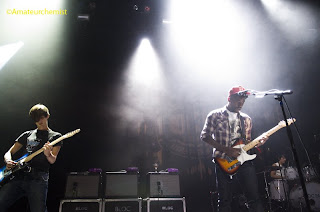 Intimacy is definitely a grower. Bloc Party continues to stretch out and explore new sounds on their third album rather than repeat their post-punk anthems on their gem of a debut album, Silent Alarm. I initially wasn't too keen on Intimacy but remembered how much I liked A Weekend In The City after repeated listens.

Launching with the electronically mangled guitars of "Trojan Horse", Kele Okereke (Vocals/Guitars) and Russell Lissack (Guitars) used their Fender Telecasters to lock together in a tension filled musical dialogue. "One Month Off" combined elements of frayed metallic guitars and solid drumming by Matt Tong (Drums). "Hunting For Witches" stirred up the crowd, as people were a bit more familiar with the older material.

Bloc Party really started to hit its stride during "Positive Tension". The seamless transition from "Song for Clay (Disappear Here)" to "Banquet" was genius as various hands in the air waved around. Kele would momentarily put down his guitar for the vocal effect heavy "Mercury" as Gordon Moakes (Bass) hunkered over his keyboard. It was difficult to see them end the set with "Like Eating Glass" as I hoped they would have played "Pioneers". I have one more opportunity as Bloc Party plays the Grove of Anaheim on Monday. I hear it is close to selling out. 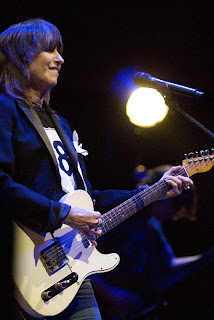 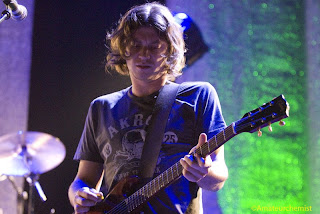 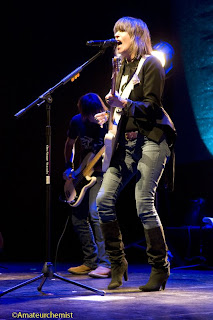 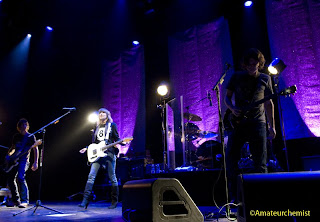 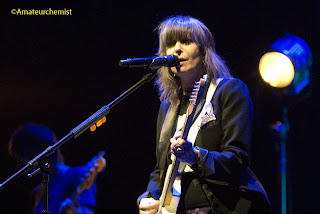 Who knew The Pretenders could rock so hard after all these years? Chrissie Hynde (Vocals/Guitars) looked and sounded marvelous. Break Up The Concrete is the new album from the Pretenders that closed the six year gap since their last album Loose Screw.

Chrissie never put down her trusty Fender Telecaster as provided the steamrolling bluesy chords of "Boots Of Chinese Plastic". The slide guitar shined during "Love's A Mystery" as tumbleweed could have rolled through the stage to help enhance the old western saloon vibe. "Back On The Chain Gang" had my colleague from LosAnjealous boast it was one of the top twenty-five pop songs of all time. I contested maybe in the top fifty?

"Don't Get Me Wrong" was another high point of their set as I still couldn't get over the fact that Chrissie sounded immaculate. The sparse characteristic guitars of "Brass In Pocket" were replicated masterfully as young and old members of the crowd couldn't help but dance along. "Break Up The Concrete" might be a thinly veiled statement that the Pretenders are changing the elements of their sound, but I surmise they won't compromise their musical foundation. The Pretenders will be back at the Grove of Anaheim on March 8th and the Wiltern on March 10th. 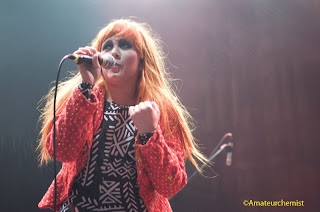 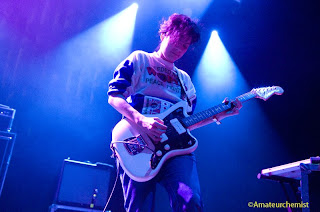 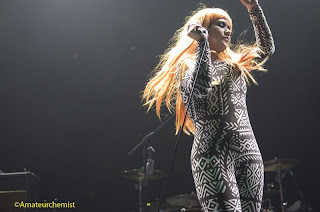 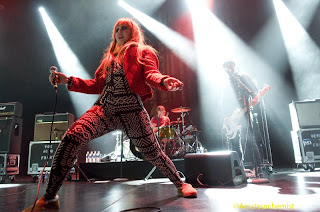 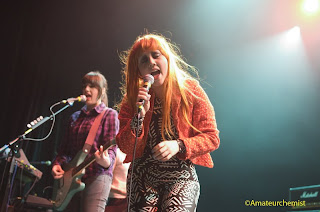 A considerable amount of older fans headed for the exits prior to the start of CSS. CSS has come a long way since I first caught them opening for Ladytron back in October of 2006. CSS still had a large gathering of fervent fans that displayed an inordinate amount of energy. One fan valiantly tried to start a "CSS suxxx!" chant.

CSS has been making the rounds behind their Sub Pop supported second album Donkey. Lovefoxxx (Vocals) was charming as usual as did her video workout routine on stage while singing "Jager Yoga". In the synthesizer department, I spotted a Moog Little Phatty Synthesizer and a Roland Juno. Unfortunately, I have no pictures of the bright red keytar that made its debut five songs into their set. Lovefoxxx momentarily reminded me of Bjork with her vocal acrobatics during "Left Behind". This observation could be clouded by the colorful wig and patterned cat suit that Lovefoxxx used to distract fans and reviewers alike.

The dancing didn't stop as the infectious beats of "Music Is My Hot, Hot Sex" stirred up the party machine. The spooky Scooby-Doo synthesizers signaled "Let's Make Love And Listen To Death To Above" as the pit jumped in one mass of humanity. "Alala" sealed the evening's festivities as Indie 103.1 successfully did Wreck The Halls of Club Nokia.
Posted by Amateur Chemist at 12:00 PM