Smashing Pumpkins at the Gibson Amphitheatre (12/02/08) 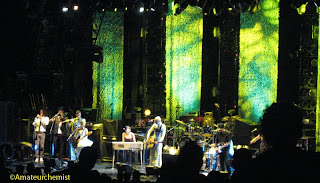 Some more shots from the San Diego RIMAC Arena show 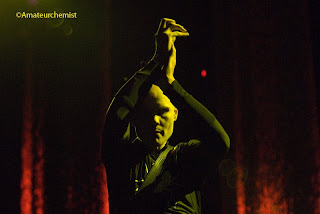 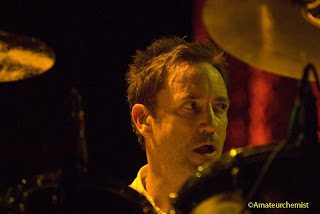 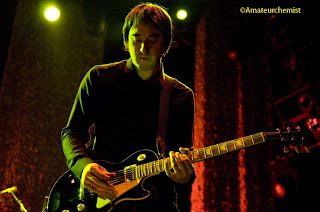 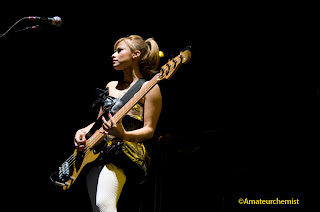 "I'm your court appointed Heavy Metal Machine!" This statement by Billy Corgan (Vocals/Guitars) would later juxtapose the kazoo filled encore as the Smashing Pumpkins played a guitar dominating set at their first night at the Gibson Amphitheater. I was impressed with their San Diego show at RIMAC arena on Sunday and was hoping they would pull out some treats for the Los Angeles crowd.

Some Los Angeles patrons didn't get the memo that the Smashing Pumpkins would hit the stage at 8:15 as the crowd raced to their seats as Jimmy Chamberlin (Drums) was in the midst of pummeling his drum kit for the jazz tinged "Roctopus" drum solo. A shortlist of drummers should play drum solos in a rock show and Jimmy Chamberlin definitely makes the list. There is also some thinly veiled irony of opening a rock show with a drum solo.

Billy would make his stage debut in a godly headpiece and a huge white gown for the "Everybody Come Clap". I would gather some fans who hadn't seen the prior show setlists were scratching their heads. The pace of the show would blast into light speed as the Pumpkins tackled "Tarantula" at a furious pace. Billy was barely keeping up vocally on the song as Jimmy was racing the beat on the drums.

A large wave of cheers erupted when the audience finally deciphered the intro guitar chords to “Siva". Jeff Schroeder (Guitars) added some subtle guitar phasing to the song and the guitar solo was a psychedelic frenzy. "Speed Kills" had another mind bending guitar solo by Billy Corgan that reminded me of the ending of "Untitled". "Stand Inside Your Love" was a complete surprise and is hands down my favorite song from Machina/The Machines of God.

When Billy gets his Tony Iommi Gibson SG, it serves as a Bat-Signal for "Superchrist". I can't wait to hear the recording of this as Jeff added some high pitched whammy washes of noise during the song. "United States" burned out your eyes with its screaming guitar octaves and Billy did his normal segway into the Star Spangled Banner solo before playing the guitar with his teeth.

Billy later exclaimed that they were going to slow it down because we apparently like "the slow jams" as they tackled "Once Upon A Time" with some ethereal Rhodes keyboards riding the undercurrent of the song. A short discussion of freeways made its way into the banter of the evening as Billy identified the 101 as the cruising freeway and stated the 405 freeway made you take a gun to your head.

The opening notes of "Today" elicited a good response from the crowd as they sang the opening verse. Jeff also sprinkled in some dashes of wah pedal noodling into the song. "Heavy Metal Machine" was bombastic to say the least. One could sense the connection between Jeff and Billy as they ended the song in a furious guitar solo harmonizing beautiful mess.

TNT in the form of the Theremin and Timpani drums would make an appearance during "Set The Controls". Billy grabbed some toy birds that chirped and placed it on his guitar pickup while adding heaps of delay for a bizarre effect. One of the unlucky birds wasn't functioning as Billy exclaimed "Dead Bird".

A kazoo filled encore capped the evening as they played "We Only Come Out At Night" and The Carpenters "Close To You". The Smashing Pumpkins might be the only band that can rock you with guitars, kazoos, a Theremin and a drum solo all in one show.

Smashing Pumpkins setlist at the Gibson Amphitheatre (12/02/08)
"Rocotopus"
"Everybody Come Clap"
"Tarantula"
"G.L.O.W"
"Siva"
"Eye"
"Mayonaise"
"Tonight,Tonight"
"Speed Kills"
"Stand Inside Your Love"
"Superchrist"
"United States"
"Once Upon A Time"
"The Crux"
"The Rose March"
"Today"
"Bullet With Butterfly Wings"
"The Beginning Is The End"
"Heavy Metal Machine"
"Glass"
"Set The Controls"
Encore
"We Only Come Out At Night"
"Close To You"
Posted by Amateur Chemist at 12:44 AM