The Horrors at Safari Sam's 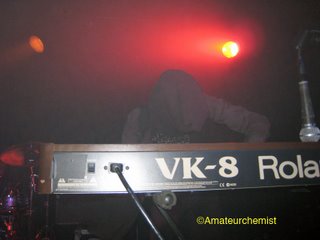 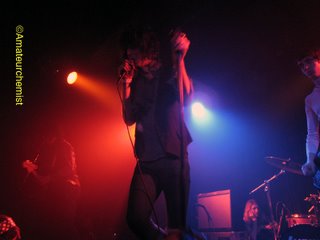 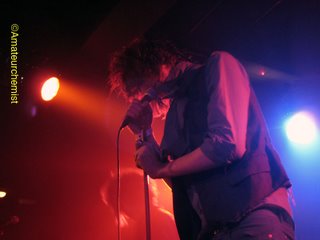 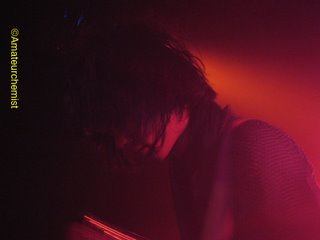 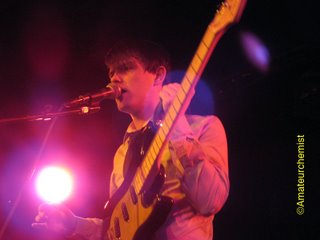 As if I wasn't still scared from the spooky Ladytron Halloween show, The Horrors made their california debut at Safari Sam's on Tuesday night. After brawling their way thru CMJ, I was expecting a highly interactive set from the Southend, Essex crew. The Cinematics hit the stage first hailing by the way of Scotland and put together a good bunch of songs that were derivative of Editors, Franz Ferdinand, and Snow Patrol but in a good way. Unfortunately they have signed to TVT records, so as I mentioned to labelmates The Blue Van... Good Luck boys!!.. I hope you get your money sometime. The Horrors hit the stage and low and behold the pit started. FYI, Faris Badwan uses shoe polish on his hands prior to shows and will leave you with the black mark of death as he reaches out and grabs crowd members and gives them the mark on their faces. Some
smart concert goers stepped away from the stage once they came on. Faris also did the obligatory multi stage dives into the crowd and causing havok in the meantime. Spider Webb was killing it on his rented Roland VK-8. Mr. Furse did his dead stare a la Sheena is a parasite video on his sweet Mustang bass. It has been fully confirmed the Z.Vex is the way to go as he
also had a Fuzz Factory pedal in his line up as well as a MXR micro amp. Unfortuately I didn't make it over to Joshua's guitar line up because apparently he makes his own pedals since he has a degree in Physics. But he did have at least 8 pedals littered on stage. Clocking in at just over 30mins you would have missed the set if you went to the bathroom. I wondered after the set who would they open for before they make it huge. Later on it came to me... My Chemical Romance.... Yikes!!!
Heaven help us if this happens.
Posted by Amateur Chemist at 11:52 AM

Email ThisBlogThis!Share to TwitterShare to FacebookShare to Pinterest
Labels: The Cinematics, The Horrors

OK, I had no excuse for missing this except sheer laziness. I apologize.... damn, looking back on these now, I was really missing out on quite a bit!!!