The Kooks at Spaceland 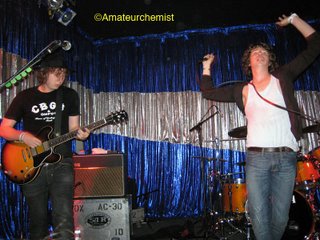 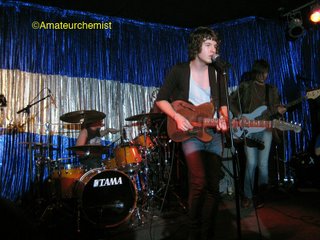 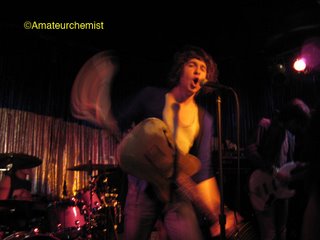 The British are coming!!! The British are coming!!! The Brits just keep invading the U.S. with the latest attack being mounted by The Kooks. Having went triple platinum in the U.K, the buzz was quite high at Club NME. I got to the club super early because I missed the sale on ticketweb 4 months earlier. No lineups at spaceland till 8:30 per spaceland security FYI. So I shuffled up the street to get some cashew chicken at the Thai restaurant which was good. Topped it off with a 50/50 bar compliments of the ice cream man who was doing a major press session for MTVU. Trainwreck Riders opened the show with a indie rockabily vibe. One of the guitarists was using metal guitar finger picks which I found commendable. Not a bad set, but the mix was so-so. The Kooks finally came on around 11:30 to a warm reception and played a confident set for a bunch of teenagers. I must have missed the memo about Fuzz pedals because Hugh had a Z.Vex fuzz factory pedal. I was impressed with his pedal board and sound thru a Vox AC30. The Kooks know what they are doing and do a good job at it. I still haven't seen much U.S. press but it will be interesting to see if they can make it to larger venues a la Arctic Monkey style. Annie from Giant Drag also DJ'ed the back room and was rocking out to some tunes. I forgot to ask her about her guest spot on the new Deftones album.
Posted by Amateur Chemist at 8:46 PM

Email ThisBlogThis!Share to TwitterShare to FacebookShare to Pinterest
Labels: The Kooks