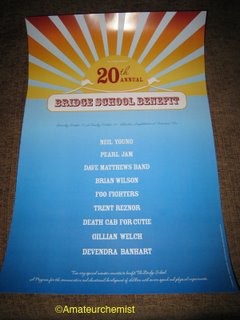 This was an amazing show. The line up was fantastic. Death Cab played a great set. Some of their highlights
include "Brothers on A Hotel Bed", and "Soul Meets Body". Then Trent from NIN came on. You can hear me say wow for the first couple of minutes of video as they were setting up the string quartet. "Something I can never have" was spectacular. They had an Asian bowed instrument and of course Trent's "prepared" piano. I recorded video/audio for both shows but mainly for the audio portion. Piggy was a surprise especially with the egg shaker and the metronome. The stand up bass propelled the track and gave it an added eerieness. I never liked piggy that much untill I heard that version. "Right Where It Belongs" was awesome and meaningful when he faced the children. "Non Entity" was cool because he really belted out the lyrics and was louder then the string quartet. "The Fragile" was SICK. Foo Fighters were spectacular as well but had the unfair advantage of touring acoustically for a few months now. Pearl Jam went old school and I couldn't have been happier. Songs highlights were "Elderly Woman Behind a Counter", "Daughter", and "Crazy Mary". Night 2 they played "Black" I was really impressed. I saw PJ back in '92 and I started to have flashbacks. Death Cab on Night 2 played "Movie Script Ending" and "What Sarah Said" which are 2 of my favorites. Trent's set on NIght 2 seemed more confident and better mixed. Nothing radical but just overall better. This trip was worth every penny. Hopefully I will upload some video for this.
Posted by Amateur Chemist at 6:38 PM