Depeche Mode at the Pearl Theater in Las Vegas 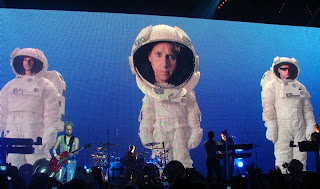 Four shows in four different cities. Crazy? Probably. Worth it? Absolutely. I have no reservations saying that Depeche Mode is the biggest synthesizer based band in the world. They currently are embarking on the "Tour of the Universe" in support of their latest album Sounds Of The Universe. 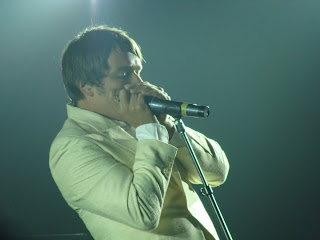 Peter, Bjorn & John have a very special place here at Amateur Chemist. My very first photopass with my then brand new Nikon D200 was back in August 2007 covering them at the House of Blues San Diego. It is nice to seem them ascend the ranks going from playing Fingerprints Records to opening for Depeche Mode.

Living Thing will unfairly get buried in the vast number of albums released this year. I was puzzled during the first couple of listens but it quickly sunk in. The electronic sparseness of "It Don't Move Me" to the catchy explicit chorus of "Lay It Down" will infect your eardrums with repeated spins. In the live department, Peter's voice translates very well and has a number of dance moves to accompany their catchy songs. Bjorn switches between the bass and keyboards with John standing behind the drum kit with his snazzy Michael Jackson Thriller button.

It is no easy task opening for Depeche Mode, but Peter, Bjorn & John give it their all. Peter made a mad dash out into the crowd during "Young Folks" to get the crowd more involved in the show. While I was hoping they would repeat "Up Against The Wall" which was played in Santa Barbara, they opted for the noisy closer of "Object of My Affection" I can't wait to see them at their own show on November 21st at Club Nokia.

Peter, Bjorn & John setlist at the Pearl Theater in Las Vegas (8/22/09)
"Nothing To Worry About"
"Living Thing"
"Don't Move Me"
"Lay It Down"
"Young Folks"
"Object of My Affection" 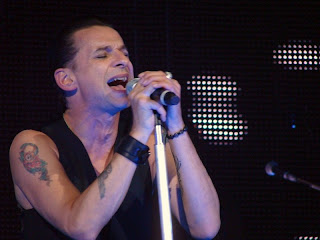 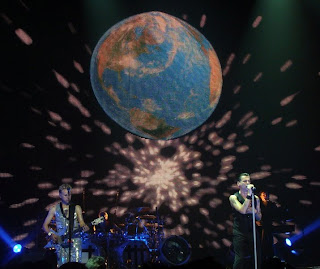 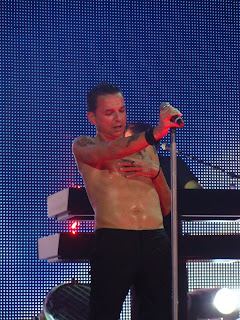 I don't think I have read a bad review about Depeche Mode throughout their whole "Tour of The Universe". The only people angry are those who had their shows canceled (San Francisco and San Diego). Having witnessed 4 shows, I would have to say Las Vegas was the best. I was originally scheduled to photograph this show and encountered a mix-up but luckily my good friend Capital M came through with the pictures.

I was bummed that I couldn't be up front with my friends but it was nice knowing I didn't have to worry about getting pictures and that I could grab a drink and enjoy the show from the floor. The Pearl theater at the Palms was absolutely dialed in for a phenomenal sounding show.

"Wrong" sounded right as Dave Gahan showed no ill effects of the vocal problems that forced the cancellation of a few shows. Martin Gore (Vocals/Guitars/Synthesizers) was switching between his Gretsch and Fender guitars to hammer out the sparkling guitar notes that matched his outfit. Andrew Fletcher (Synthesizers) was stationed behind a three keyboard setup and was playing a few bars in between with clapping along.

The visuals on this tour have Anton Corbijn's trademark stamp all over it. Unfortunately, the gigantic LCD round projector ball could not fit in the Pearl. Luckily, I was close enough that I could take in performance and watch Depeche Mode in action. If you haven't attended a live Depeche Mode show, then you haven't experienced one of the top live performing bands. The magical combination of the band, songs, and performances leave little doubt why Depeche Mode still sells out numerous shows across the world.

Having a voluminous discography, Depeche Mode must struggle to please fans with "perfect" setlist. As much as I would love for them to play "Happiest Girl" from the "World In My Eyes" single, I know it will never happen. My favorite part of their setlist is the barrage of songs starting with "It's No Good" all the way to "Fly On The Windscreen". I was in synthesizer heaven.

Martin Gore has a two song break in the middle of the show that helps illustrate why Martin could very well carry on his own band with gorgeous renditions of "Jezebel" and emotionally revealing "Question of Lust". I especially admire the fact that Dave always comes back on stage to re-introduce "MR. MARTIN GORE!" as a tip of the cap to remind the audience how vital Martin is to Depeche Mode.

It seemed like they have been only playing for a few minutes when they leave the stage after a rousing version of "Never Let Me Down Again" . I was ecstatic that they played "Strangelove" to close out their first encore as they did not play this song during the other three nights. Depeche Mode closed the evening with a rambling bluesy "Personal Jesus" that left the crowd buzzing as we emptied into the Palms Casino. This show will make it into the top 5 shows of 2009.

Encore #2
"Personal Jesus"
Posted by Amateur Chemist at 8:00 AM

Email ThisBlogThis!Share to TwitterShare to FacebookShare to Pinterest
Labels: Depeche Mode, Peter Bjorn and John, The Pearl at the Palms