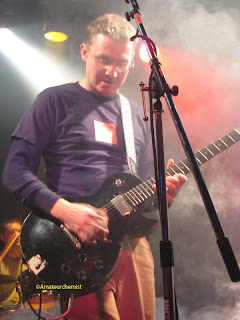 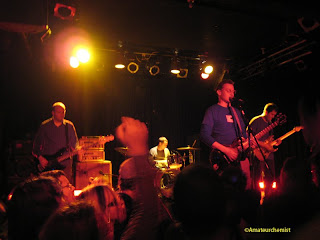 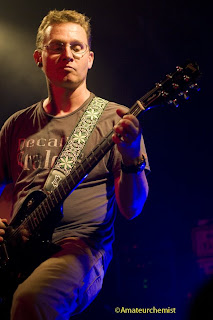 My review of Hum on New Years Day is here.

At the stroke of midnight, the impossible happened. I witnessed a devastating set by one of my all time favorite bands, Hum. The last time I saw Hum was almost twelve years ago in England of all places. Out of all the concerts I have reviewed on my site, I never would have dreamed of seeing Hum. The Cadillac commercial gave me a glimmer of hope and I had wishfully thought they might reunite back in September of 2007.

The bombshell would come in October 2008 when a commenter stated Hum would play the Double Door for a reunion show. I immediately booked my flight and was determined to go. The icing on the cake was when they added a second show on 1/1. Even though it was 23 degrees and I could possibly get snowed in, I was willing to take the chance.

It seems that Hum still had all of its original equipment as Tim Lash (Guitars) was still playing his battered Fender guitar through a Hiwatt amplifier and Matt Talbott (Vocals/Guitars) was using his Gibson Les Paul Studio into two Orange Amplifier heads. Jeff Dimpsey (Bass) was rocking a G&L bass through a Trace Elliott amplifier.

"Afternoon With The Axoltols" transported me back instantly as I was simply amazed how good Hum sounded. The guitar tone of Matt and Tim was exactly like I remembered it. Bryan St. Pere (Drums) was pulverizing his drum kit and tossing in some stick twirls like the good old days. The driving intro of "The Pod" was pure aural bliss, as I still couldn't believe I was witnessing Hum. Matt would frequently smile and look at Tim, seeing that the crowd in front of the stage was going insane. I overheard people in the front coming from such places as North Carolina, Dallas, California and Florida.

"Iron Clad Lou" from Electra 2000 was a blast from the past as Matt dug deep to scream the lyrics. The double shot of "Green To Me and "Comin' Home" convinced me that this trip was worth every penny as the guitars roared in unison behind the clamped down rhythm section of Jeff and Bryan. Tim also would flick the strings on his headstock for some metallic overtones. I highly recommend you pickup Tim's other project Glifted that is primarily a guitar frenzied masterpiece.

"Ms. Lazarus" was as razor sharp as possible with the smoke machine on overdrive billowing smoke on the stage. It seems like Hum rehearsed quite a bit as they effortlessly recreated the same magic on stage. I always thought Hum was ahead of their time and still think their music sounds even better today compared to a good majority of bands from the nineties.

The requisite "Cadillac Song" (ie "Stars") was played and the crowd lost their minds. My spine tingled during Matt's ultra heavy palm muted "solo" breakdown. Matt nailed every note perfectly. Hum closed out the evening with my top song "I Like Your Hair Long" in its Drop-D guitars full throttled glory. I was hoping for "Dreamboat" but was still fortunate to witness such a riveting set. The bar for 2009 is starting extremely high and I don't know who is going to top these two shows. I can only hope Goldenvoice ponies up some cash for Hum to play Coachella in April. 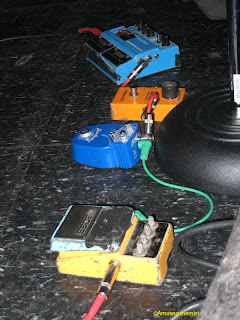 Posted by Amateur Chemist at 1:38 AM

I seriously don't ever need to see another concert as long as I live. I walked out of there feeling like I was on drugs. The whole thing felt like one big, beautiful family reunion, minus the animosity, and holy crap did I ever rock my face off.

absolutely - great review and great photos. thanks so much for the write-up and posting the shots. part of the surreal experience was knowing there were other massive hum fans there with me and getting to chat with them. we are all truly lucky they came back together for a few nights.

I have seen a good deal of shows, but never Hum. It was amazing how good they sounded. No rust whatsoever.

It was also cool to be at a show that everyone was way into. By that, I mean if you go see some mainstream act, half the fans are there just for the hits. The crowd waving fists as they shouted "Downward is Heavenward" on the opener was amazing.

My only regret is that I wasn't able to make it to the show the following day. I can die happy now.

Myself and 6 friends converged for this one; I hadn't seen Hum since '05 in Champaign, and it was like this amazing reunion with all of the fans we'd met and spoken with years ago. My favorite moment was during the last song, "You'd prefer an Astronaut", where a crowd surfer kicked off this dude's glasses, and we all sort of created a parameter around him while he looked for them. Everyone got out cell phones for light, and their only concern was the well-being of a fellow hum fan...I glimpsed them by my left foot, so I returned them, and everyone was so overwhelmed with mutual joy for a guy they didn't even know that I was buried beneath pats on the back and hugs, and we all turned just in time to witness the hard-hitting closure. You were spot on with the family remark - only at a Hum show.

I honestly would have done just about ANYTHING to be at either night. Unfortunately for me I was broke and going through a break up in California instead!

Is there any audio copies of the show floating around out there? I would be super grateful to at least hear it!