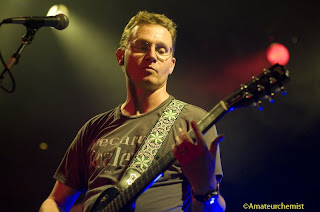 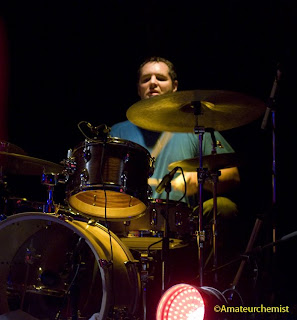 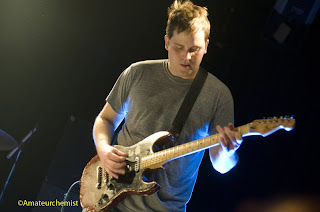 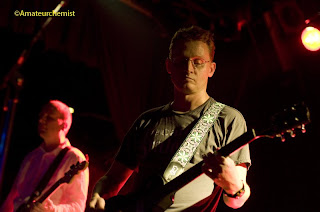 My review of Hum on New Years Eve is here.

Seeing Hum after twelve years was a dream come true. I didn't schedule my flight back to Los Angeles right away just in case they added an extra night. I continued to peruse the Double Door website and immediately got a ticket for the second show on New Years day. I didn't expect to hear any different songs but was excited just to see them again.

The atmosphere was more subdued for this show since everyone was probably hung over and it wasn't an open bar show. Hum did switch up the setlist by starting off with the shimmering "Isle of The Cheetah". The overall sound mix was improved as the blending of Matt Talbott (Vocals/Guitars)and Tim Lash's guitars was flawless. Tim gave me a scare early when he was tuning up an ESP Guitar. I thought he beat up Fender had finally gave out. Tim's magical Fender would finally surface when Hum took the stage.

"The Pod" was fierce but didn't include the phasing like the recorded version on You'd Prefer An Astronaut. The guitars would really roar during the ending of "Iron Clad Lou" with both Matt and Tim crushing the repetitive Drop-D tuned riff.

A trifecta of Downward Is Heavenward tunes in the form of "Green To Me", "Ms. Lazarus" and "Afternoon With Axoltols" simply destroyed as I still was in disbelieve that I got to see Hum twice. Even though I have a test pressing You'd Prefer An Astronaut on vinyl, I was unfamiliar with the song "Inklings" which is a B-side from Downward Is Heavenward era. Does anybody remember the song "Overthruster"? They played it in England when I saw them in a small club when I happened to be on vacation.

Even though I have heard "Stars" way too many times with the Cadillac commercials, seeing it live is something to behold. The crowd went crazy again just like the night before. "Comin' Home" tore up my eardrums as Matt switched between his screams and spoken vocals. I still remember seeing the video on 120 minutes on MTV. Check out Youtube for some footage of Hum on 120 minutes when they played "Stars" and "I Like Your Hair Long"

The setlist had "Double Dip" or "Winder" written down as the encore. Hum went for the riff heavy "Winder" from Electra 2000 which pleased a number of old school Hum fans. I wanted to hear "Dreamboat" but still was glad that they played "I Like Your Hair Long" to close their set. I also purchased two Hum t-shirts and two different posters from each night. The icing on the cake was when I caught one of Bryan's drum sticks to cap my memorable trip to Chicago. I would like to personally thank Hum and the Double Door for making 2009 a year to remember.

just a hint, that "phasing" at the beginning of the pod isn't a phaser, it's just the intro riff played backwards; hence, the off-kilter sound. live, tim just plays the riff backwards (last chord first, rhythm reversed) instead of having the "tape played in reverse" sound on ypaa.

Highlight of the night for me came during "Winder" - as Tim started playing the first melody line, Matt looked over and the two smiled at each other in surprise. I guess since they hadn't played it on NYE there was a little bit extra of an emotional reaction to the song which was cool to see. Great show.

What a crazy town - Walking outside after the New Year's Eve show was like entering Escape from L.A. My favorite addition for this night was 'Pewter', which I've never heard played live. Bryan's stick twirl before the finale of Iron Clad Lou was classy. Still can't believe Matt uses a milkshake chorus...I bought that pedal in college for 50 bucks because I couldn't afford any better. Also, his distortion looks like he's scavenged the actual toggle surface from an old boss phaser, you can tell by the greenish paint. Was really great to meet Jeremy, Jeff and his girl, Ryan, and everyone else we hung with at the door before the show.