Thom Yorke at the Echoplex 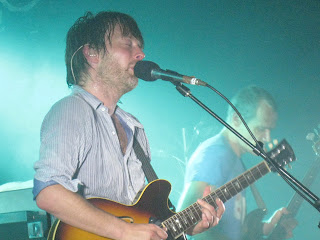 Thom Yorke at the Echoplex from Stereogum.

I got lucky. I will admit it. Ticketweb completely crashed and I was one of the chosen ones who actually got through. I should have purchased a lottery ticket but figured my luck was already tapped out. I had two laptops going at the same time and was logged into ticketweb at 11:53am when the dreaded "processing" screen appeared.

Unfortunately, I have purchased enough tickets through Ticketweb to understand that they don't have the bandwith to put customers in the queue. I took a leap of faith and refreshed one of the computers just after 12:00 to see that the show had sold out. I promptly refreshed my other computer and magically pulled one ticket. I didn't feel completely satisfied until I received confirmation via email that my transaction went through.

It is still difficult to believe the fact that Trent Reznor, Stephen Malkmus, Billy Corgan and Jane's Addiction all have graced the Echoplex this year. Watching Thom Yorke and Flea on stage at the Echoplex was quite surreal. In the music department, it was out of this world. While the shows at the Orpheum were more refined and tighter in the performance department, the intimacy of the Echoplex was unbeatable.

The Eraser was unfairly dismissed upon its initial release as a warmed over Radiohead album, I enjoyed the primarily electronic album. It was fascinating to see the album come to life in the live setting as Flea made perfect sense for the band with its dominant bass lines. Nigel Godrich was the sound guru in the background adding keyboards and guitars when needed. Mauro Refosco was the secret spice to the whole band coloring the songs with unique percussion.

It isn't surprising that the whole show at the Echoplex is basically on You Tube. This destroys any remaining mystique about the shows but the one thing you can't feel via You Tube is the Flea's bass rattling your chest or the excitement and anticipation before Thom and company took the stage.

One of the funnier moments of the evening occurred when someone with a camera tried to get past me stating they were a friend of Thom's. The irony is that everyone who was inside was a friend of Thom's whether they were on the list or paid just like me. I would also like to thank Thom for flipping off the person who wanted to hear "Skynyrd". She should have been kicked out of the Echoplex. That joke isn't funny anymore.
Posted by Amateur Chemist at 12:01 AM