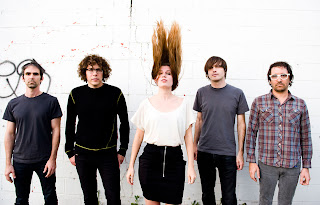 I still frequently spin the sophomore album Hideout by Film School and anxiously await their next release. In the meantime I have been digging their contribution to the Love and Rockets tribute album "An American Dream". I was flattered they asked me to do some promotional photos and I was pleased with the above result. Check out the excellent overview by Albert Ching in OC Weekly of No Doubt's historic run of 4 nights at the Verizon Wireless Amphitheater in Irvine. Pick up the print edition which includes an assortment of my photos. IO Echo continue to make waves on the local and national scene. I am sure you may have spotted their commercial for the Palm Pre? They also landed the super juicy gig of opening for Nine Inch Nails at the Wiltern on September 5th. I will be there for sure to see how they hold up for the demanding Nine Inch Nails fans. I have received intel that A Place To Bury Strangers are destroying eardrums and ensnaring fans in Europe as they prepare to invade the States with their new album Exploding Head. I can't wait till they hit the Casbah (October 15) and the Echo (October 16).
Posted by Amateur Chemist at 12:01 AM

APTBS and Darker My Love on the same bill. They are going to blow the place apart.