Gliss at the Echo A week ago, I managed to quickly run upstairs to the Echo to check in with Gliss. They just wrapped up a US tour supporting their brillant new album Devotion Implosion. I was torn because Amusement Parks On Fire were playing downstairs at the Echoplex but I had to watch a few songs of Gliss before returning downstairs.

Gliss will be heading out to across the pond for more touring but you have one last chance to catch them tomorrow before they leave. The best part is that Gliss is playing with a killer line-up that is a benefit for the Sante D'Or Foundation. 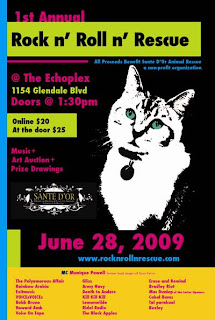 Posted by Amateur Chemist at 3:18 PM

Email ThisBlogThis!Share to TwitterShare to FacebookShare to Pinterest
Labels: Gliss, The Echo