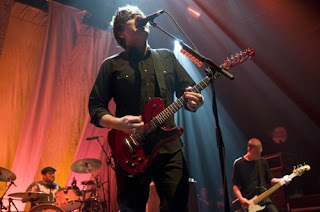 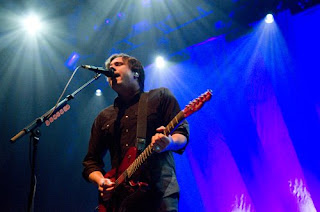 Jimmy Eat World know about the dangers of being on a major label. Their brief tenure on Capitol Records eventually worked out in their favor as they recorded Bleed American on their own dime and released the album on Dreamworks records to breakthrough to the mainstream.

Jimmy Eat World has wisely kept in touch with their fans via Twitter along with a very active online fanbase. Jimmy Eat World pleased many fans by announcing a series of shows celebrating the ten year release of their cult classic album Clarity which they would play in its entirety. It was no surprise that the brief tour across the states promptly sold out. 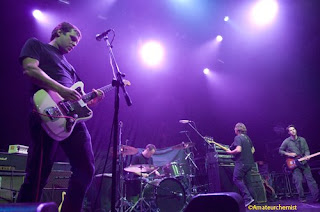 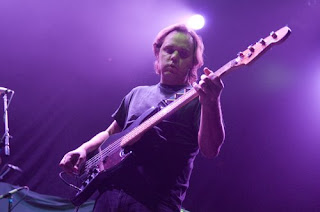 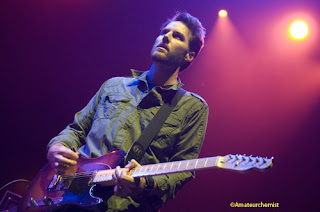 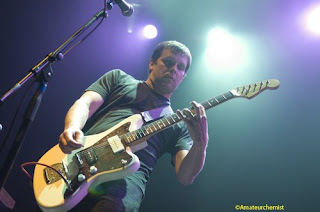 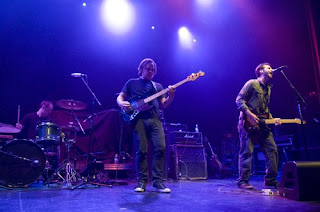 I honestly don't remember No Knife from back in the day. Apparently, they toured with Jimmy Eat World during the Clarity years. What I do know is that Mitch Wilson (Guitars/Vocals) can effectively rock a Fender Jazzmaster. No Knife cut through with their sinewy guitar driven tunes. It was a solid set that will have me investigate their back catalog. 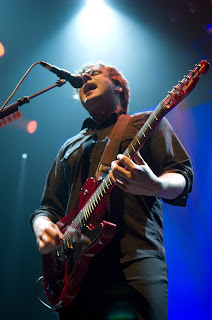 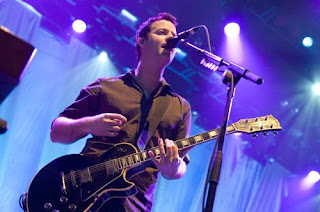 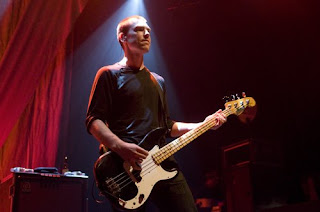 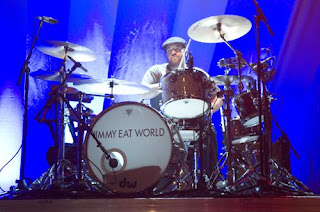 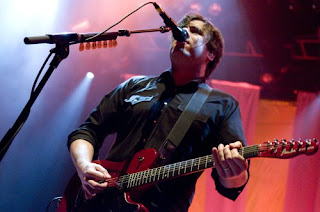 Jimmy Eat World was winding down their tour by the time they hit Los Angeles. This was beneficial in that they had refined and mastered performing Clarity in its entirety.

One thing I don't see mentioned that often is how well the combined guitars of Tom Linton (Guitars) and Jim Adkins (Vocals/Guitars) blend together. It should also be noted Jim plays his beautiful custom Fender thinline Telecaster. Tom was rocking a Gibson Les Paul that really howled during the drop-D tune "Blister" which seemed to be one of the crowd's favorite tunes of the evening.

"Lucky Denver Mint" rivals "Blister" as my favorite tune for Clarity and was recreated flawlessly. The evening seemed to fly by in minutes as they ripped through "Your New Aesthetic" with the well placed bass notes of Rick Burch (Bass). Clarity was sequenced very well and the songs weaved together seamlessly.

Other interesting musical gear notes include Jim using a loop station for the cycled feedback wash for the beginning of "12.23.95". I also spotted a Boss Space Echo in Tom's pedal chain. It was evident that Jimmy Eat World meticulously reconstructed the tones from the album.

Some other amusing notes included Jimmy Eat World twittering about the current state of the Capitol Records building and Club Nokia got into the Twitter act by enthusiastically quoting song lyrics throughout the evening. Jimmy Eat World closed out the evening with some deeper cuts like "No Sensitivity" and a few radio staples "Work" and "The Middle" to a rapturous applause. So do I hear a ten year anniversary tour for Bleed American in 2011?
Posted by Amateur Chemist at 8:35 AM